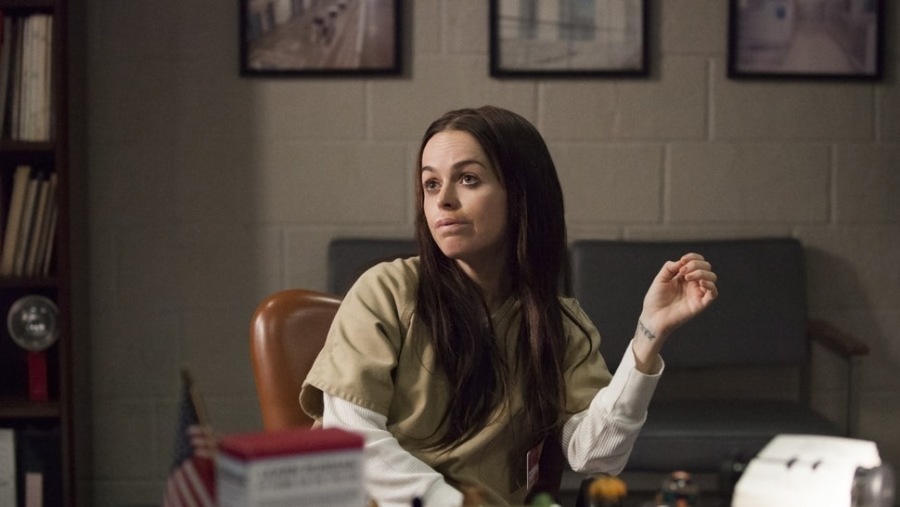 Toward's the ending days of Doggett's life, she was studying for her GED. Hours before her death she took the GED and expected she would fail due to not being allowed extra time for her dyslexia. She was devastated by not being allowed more time on her exam after being encouraged to stay in the class even though she was struggling with written exams. Even the answers she knew would be misspelled on paper causing her to fail. Not being good at school was a metaphor for Dogett's life. She thought it met she was stupid and unworthy, saying things like I don't need a test to prove how stupid I am. It did not help that her junk father reinforced her fears of inferiority by telling her she was worthless, stupid or problematic in one way or another, which is one of the reasons it was so easy for her to come to love the lord. She had daddy issues.
To her passing the GED met redemption. She was drawn to the cross for the same reason she was drawn to the GED, she wanted to see herself in a different light. On Orange Is The New Black their are characters motivated by their outer world and what the other characters are doing. For instance everything about Piper and Alex is always motivated by the other. Though they are the main characters, they are externally motivated to act because of their love for another. Dogett's character is motivated by her internal world. She is motivated by the way she feels about herself.  She harbors a belief in herself that she is inferior, which causes her to seek out avenues where she can feel powerful like drugs or Jesus.
In the case of Dogett reform did happen in jail. She went from a crazed and homophobic junky to a clean and sober woman who was friends with lesbians, blacks and the mentally challenged in jail. She sobered up and was not seen praying as much. Instead she took real life steps towards improving herself in her sober frame of mind, where she started taking GED classes and even got a tutor for extra help. Dogett took that GED test more seriously than anyone there, even the teacher who ended up being the lazy and corrupted hands of good ol' CO Joel Luschek (Matt Peters).

The GED was a metaphor for Tiffany's whole life. if someone would have just noticed she was smart, but needed extra help maybe she would not have had to shot a nurse because she wanted an abortion. 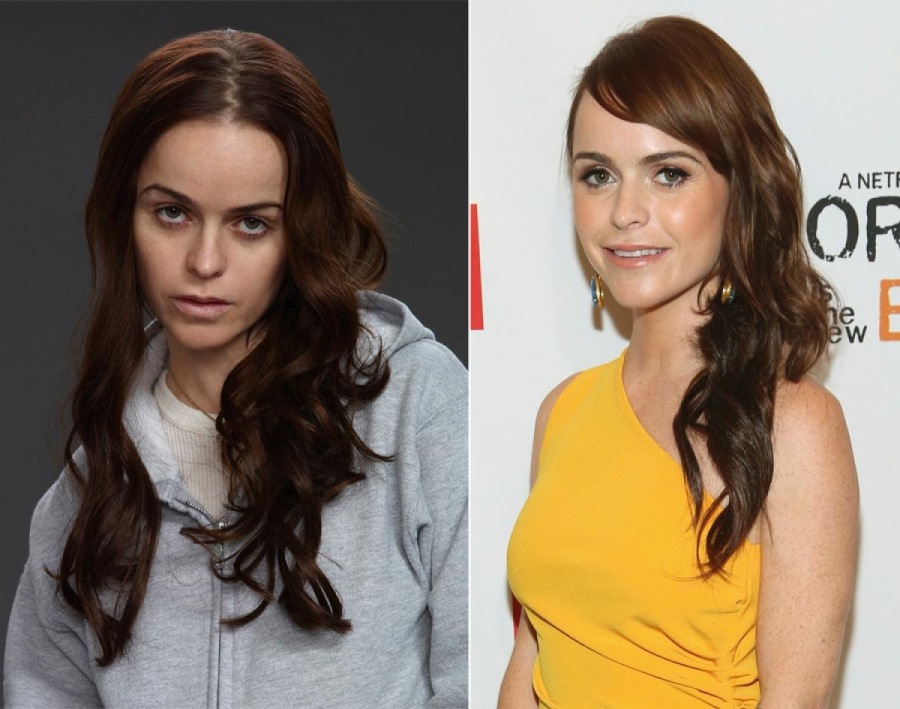 This season especially brought new life to Pennsatucky as she goes on a mission to achieve her higher education goals. After the new warden kick-starts a series of new rehabilitation programs for the inmates, Litchfield's favorite bible-thumping prisoner finds a new passion for education. She comes to discover that her struggle with reading and learning in school is actually due to dyslexia. When her new instructor discover this, he enlists the support of Taystee (Danielle Brooks) as her new tutor and guarantees her extra time for her exams.
When it finally comes time for Pennsatucky to take the final exam, she discovers that Luschek never completed or filed the necessary paperwork to vouch for her dyslexia and ensure her extra time on the exam. Certain she failed, Pennsatucky turns to Daya's drug-pushing crew for support. Pennsatucky ultimately turns to one final, lethal dose that takes her out

Dogett's, Asian teacher quit after an in house drug crew tried to make him a drug trafficking mule. The girls coercing him traced his balls with a shive and threatened his family. He was the teacher who told Dogett she was smart, but had a learning disability and he told Dogett that she would receive more time on her test.
Dogett's death was foreshowed a few episodes before when they were talking about how easy it is for an addict to OD after they get clean because their system no longer has a tolerance for it. In Dogett's past she smoked so much myth she smoked her teeth off. Dogett started engaging in promiscuous sex, exchanging sexual favors for drugs or soda and devaluing herself at an early age. Because she was on drugs at an early it's safe to say she never had a chance to escape or think about her predicament. In Dogett's life she experienced a number of brutal rapes  causing her to have many abortions. Interestingly enough she did not shoot the men she had sex with or who she felt violated her, she shot the nurse who judged her for having an abortion. 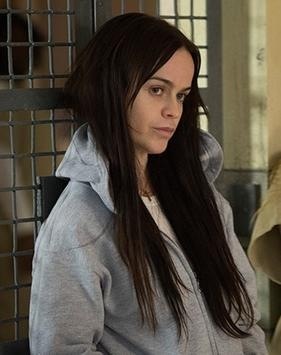 "Pennsatucky was arrested for shooting an abortion clinic nurse after the nurse offended her. The clinician had made a snide comment about the number of abortions Doggett had. (The show says five, but she's shown praying over six crosses in the first episode of Season 3, so perhaps one of the times it was twins.) Anyway, Doggett got a gun from her car and killed the offending nurse. She was hailed as a Christian hero by anti-abortion extremists who rallied for her "cause" and even hired her an expert lawyer.

Passing the GED test along time ago could have saved Doggett's life. One of the reasons it was so easy for her to succumb to drugs is because she had an underlying belief that she was stupid. We don't hear much about Doggett's education though we know she can't read well and has a peculiar way with words. We know she does not have a formal education because she does not have her GED. Even though Dogett was a known junky she was also able to influence large groups of ordinary people to support her believes and ideas through the name of Jesus.
Doggett was smart but the only influence she had around her growing up was a Junky. Junkies don't care about their daughters passing a test or having a good life, they just care about their next fix. See the thing about having a good life is it takes a plan and children don't know how to plan for life because they are not adults they are kids. Kids really need their parents to guide them through life and help them come up with a solid plan, so when you have a father who is a junky of course you get guided down the junky road, which is why we learned more about her father through flashbacks.
If we saw a five year old smoking crack we would assume it was the parents fault and do our best to intervene and help them. When we see a 20 year old on crack, we forget they were once five and don't try to help them. We just demonize them and put them in an early coffin, which begs the question did Dogett ever have a chance coming from that trashy community with meth heads everywhere and a father giving her the drugs like it was baby formula?
The irony of Dogett's death is she was not the one fans were expecting to die. In the final last season of Orange Is The New Black, fans were waiting on the suicide of Tasha, who was sentenced to a life in prison after her bestfriend lied and said she killed a prison guard to buy her own freedom.

Tiffany "Pennsatucky" Doggett is a fictional character in the Netflix series Orange Is the New Black, portrayed by Taryn Manning. Manning was offered the role without needing to audition. The character of Doggett is based on a real-life prisoner, a "young woman from western Pennsylvania who proudly called herself a redneck".[1] She is originally from Waynesboro, Virginia. Prior to her imprisonment, she is shown to be exchanging sexual favors for soda or money. Doggett is also known to have had five abortions. She is charged with shooting an abortion doctor and decides to hire a Christian lawyer; the ensuing support she receives from Christian groups leads to Doggett's becoming a born-again Christian.
copy and pasted from Wikipedia

Doggett makes her first appearance in Season 1, episode 5 and initially is the main antagonist but becomes a protagonist in later seasons. In her debut episode, she unsuccessfully attempts to hang up a cross in the prison chapel and expresses homophobic views. She conflicts with Alex Vause and Piper Chapman throughout the first season. In the second season, Doggett's storyline revolves around her friendships with Sam Healy and Carrie "Big Boo" Black. This friendship with Big Boo continues into the third season. Big Boo comforts Doggett when the latter is feeling remorse for her abortions and when she is raped by a correctional officer. The character Doggett and her storylines have received mixed reviews from critics, though Manning's performance has received critical acclaim.
copy and pasted from Wikipedia