Thanksgiving break has come and gone. We had a brief resting period where we could sleep all day. The best part, though, was that we didn’t have to worry about homework and tests.

The catch was that when we got back to school, we only had two normal weeks left before finals week.

This means students are forgoing sleep, downing energy drinks and reviewing notes and textbooks until the early hours of the morning.

This process can be dreadful and exhausting.

A few semesters ago, there was a student in Grant Hall who had a nervous breakdown. Apparently, all the caffeine pills and number-crunching for his calculus test got to him.

For many students, finals are an unavoidable plague; Echinacea and Vitamin C won’t save us from late-night cramming, sweating and anxiety that comes in the two-hour hell of an exam.

It’s debatable whether we should actually have finals. Frankly, many are sick of spending time preparing for a standardized test with the intent of rating an individual’s worth. 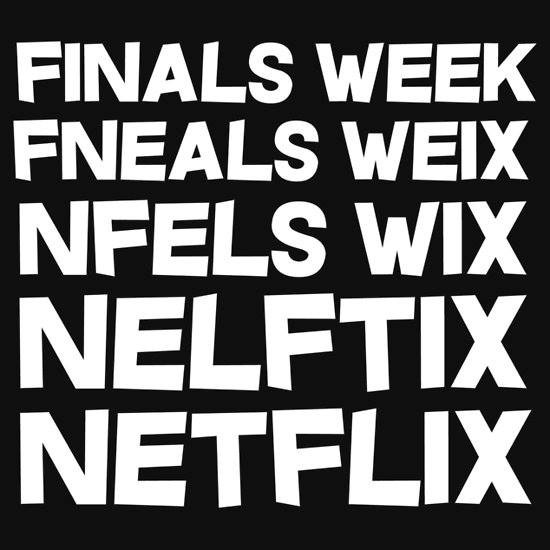 The most important discovery students can make this year is that college is not that important. I heard someone say this once, and though that individual was flunking out, it automatically made sense.

College is a place to hang out for a few years while we’re figuring ourselves out. There’s no need to strive to be perfect, because it’s impossible. Relax over final exams.

Take comfort in knowing that finals are nervewracking for most students. We stretch ourselves too thin with the extra studying and cramming, juggling jobs, home life and friends. We have to stay positive and look for the silver lining.

Finals week can be a great time to see people we haven’t seen in class or on campus since the beginning of the semester.

Bierce Library is so rowdy during finals week that finding a seat at a computer is nearly impossible. But we can see our Facebook friends if we take one lap around the library.

Look for free food this week and during finals week. 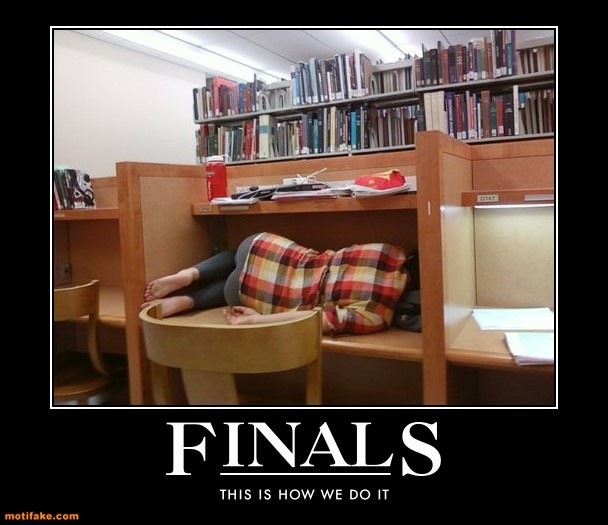 Statistically speaking, the best time for students to get free food is either the first two weeks of school or the last two. My university had pancakes and ice-cream study breaks this time of year, enjoy them!

Between the free breakfast food and seeing our Facebook friends once more, we may even forget about those exams for a little bit.

Finals week isn’t all bad though; it’s the last week of the semester. There is a light at the end of the tunnel, and for most of us, there is no studying there.

So let’s get a late night cup of coffee, chug a few Red Bulls and begin studying.

Its only college, and, after all, it’s not that important.