Belcalis MarlenisAlmánzar (born October 11, 1992), known professionally as Cardi B was on a trajectory of musical success that moves from college drop-out, to stripper to Instagram influencer, to reality star, to mainstream rapper. She came hard on the rap scene with her hit Single "Bodak Yellow," which broke Lauryn Hills record for longest-running No. 1 by a solo female rapper ever, according to Billboard. She beats out Lauryn Hill, who held the number one spot for two weeks in a row in November 1998. (The single was for her classic “Doo Wop (That Thing).”)

"Listen to my music because it is good.” Cardi B

Cardi B pursued a career as a stripper at the age of 18. Cardi B has said stripping was beneficial to her life in many ways, including developing her stage presence, building a fan base, and giving her wads of cash. According to reports, she planned to retire from stripping at 25 but quit at 23 when she became a social media personality.

In an interview with the Guardian, Cardi pointed out that she wouldn't be shamed for becoming a rapper after a previous career as a cashier, so why should she be shamed for her past work as a stripper?“Would people feel some type of way if I was a cashier-turned-rapper?” she said. “People want me to be so full of shame that I used to dance. I would never be ashamed of it. I made a lot of money, I had a good time and it showed me a lot — it made me open my eyes about how people are, how men are, about hunger and passion and ambition.”

Call it the Millennial Manifestation of the Black Cinderella Story,but Instagram made this girl famous. Cardi B showed the world magic really does happen and all it takes is being yourself on Instagram and not using a filter. A lot of people rise to fame because they have inside connections. Some people get their big break being in the right place at the right time. Cardi B got famous by being unapologetically herself and loud about it on Instagram. She wasn’t afraid to post whatever she was thinking, to make fun of other people or herself. She had over 10 million followers on Instagram, before she released an album and this was because the chick was funny and unapologetic.

lmao be your friend? if I wanted a snake, bitch I'd go to the pet store

One way to get noticed is to become a reality TV STAR JUST LIKE CARDI B. The rapper became a regular character in popular reality series Love and Hip Hop New York, first appearing in season six. Cardi B stayed true to her Instagram and did not filter her words or actions for television, making her a fan favorite. She talks trash to powerful figures in the industry, she pushed her own music career, and she snatched other rappers by their weave, showing her competitors she was not to be messed with and her music was to be taken seriously.

On the reality TV show she was encouraged to take an etiquette class to get rid of her accent and attitude, but it seems like the world fell in love with her because the one thing about bad manners is it comes from a real place.

When her etiquette coach told Cardi not to wear revealing clothes at business meetings, she responded, “I have crooked teeth, so I would rather they look at my tities.”

It’s no secret that famous and rich people are unrealistically good-looking. Pretty people are usually not that pretty in reality. Our famous people are usually amazing to look at because of digitally editing photos, makeup and hair, and plastic surgery. The difference between Cardi B and most celebrities is she didn’t deny going to a plastic surgeon. If you can afford plastic surgery, a new look for a new life makes a lot of sense. She never tried to pretend like her beauty was all natural and saw investing in her looks as a business move. In fact, she references her cosmetic augmentations in her songs. 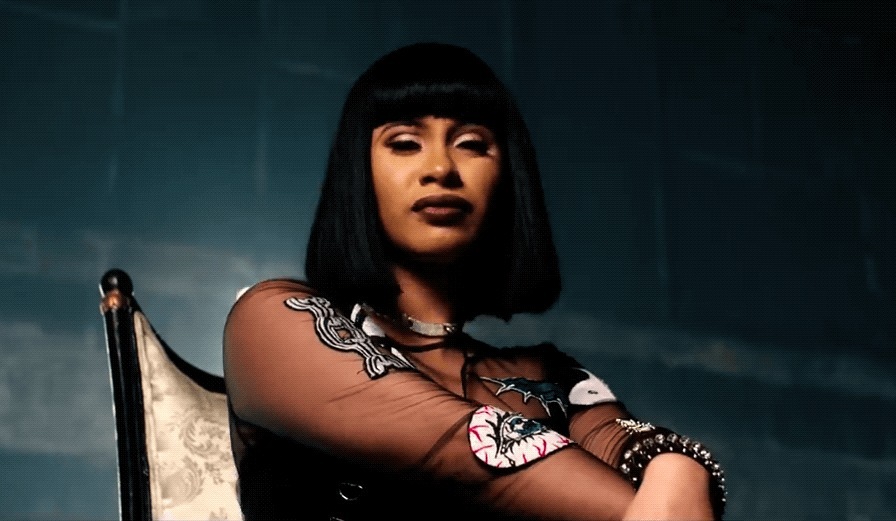 Cardi’s music career took off relatively fast. She released her first mixtape in 2016, and in November of the same year, she was featured on the front cover of Vibe Magazine’s ‘Diva’ issue. Since then she has topped Beyonce and Nick Minaj in the billboard charts. She has even worked with Bruno Mars and has had icons like Janet Jackson cover her songs.

“I do feel kind of guilty sometimes 'cause, like, I could buy myself a $5,000 dress or a $3,000 dress, and I'm buying these things, but I'm knowing that my cousin need money for the rent. And then I gotta tell myself, 'Stop feeling guilty. You worked for this.' Cardi B