Those Magnificent Men in their Racing Machines 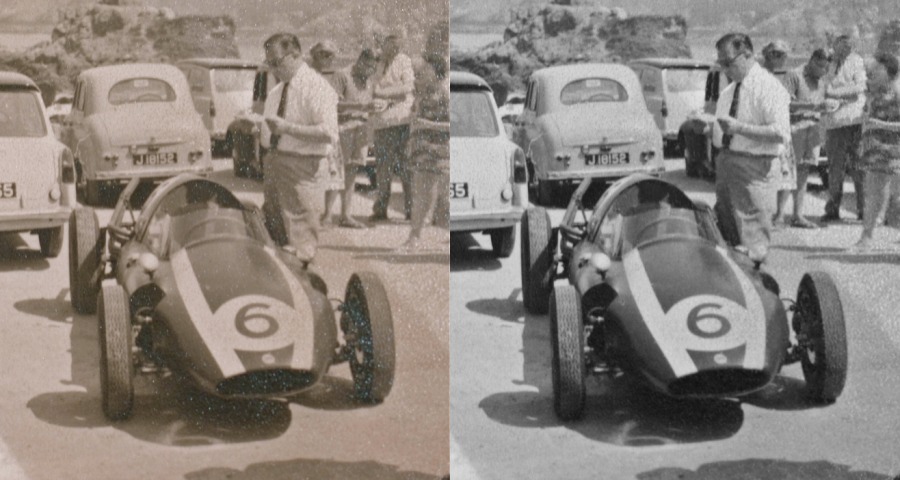 I spent the last hour restoring an old photograph. It is one of a handful of photos in my possession of a man I barely knew. It’s a labourious but enlightening process. I bury myself in the photo, and with each click of the mouse, I have carefully restored a beautiful car, laundered a pair of trousers, pressed a shirt, and swept the tarmac.

When I have a spare moment, I can be found researching this man’s life, trying to put together the pieces of a vast puzzle. It’s an arduous affair, but there is a story waiting to be told, a screenplay to be written.

The first part of the story is well known in racing circles. It is of how Charles Cooper and his son John began building racing cars out of their tiny garage in Surrey, England. Within a short 12 years, the Cooper Car Company ended up dominating Formula One, beating out Ferrari with Constructors’ Championship wins in 1959 and 1960 and 16 Grand Prix wins.

The second and less known part of the story is about a small band of gentlemen who took it upon themselves to break class speed records, some of which still stand to this day.

Even in this day and age it is not easy to piece together the finer details of the story, but as the months go by, much of the print media of the time is making it to the web.

Back in the day, I had access to literally hundreds of photos, newspaper clippings, starting grids like the one above, and trophies, many trophies. I remember the trophies lined up on a shelf in the living room. He called it his “silverware” and actually wanted to put it all away but the family insisted. I didn’t take much notice.

As the decades rolled by, with the family break up, much of the material dissipated. I had managed to cling on to a few photos, which I stuck in between the leaves of books. As I find myself approaching my fiftieth year, it is time to finally put pen to paper and write my first novel.

I get inspiration from the photos - imagining conversations past. Who is that women seated next to him? Are they planning the next round of record attempts? Oh to be able to eavesdrop.

The silverware is gone. Taken by thieves in the night. What’s left are my handful of photographs and my imagination.

I have just finished Chapter Four but I see no rush. It could well take me years to complete. I know it’s a great story, but I do not kid myself that the novel will fly off the shelves. I write this not for anyone but the families of the late greats, Jim Russell, Bill Knight, Roy Salvadori, John Cooper, Arthur Owen, and most of all Ron Searles who gave up his life chasing a dream. 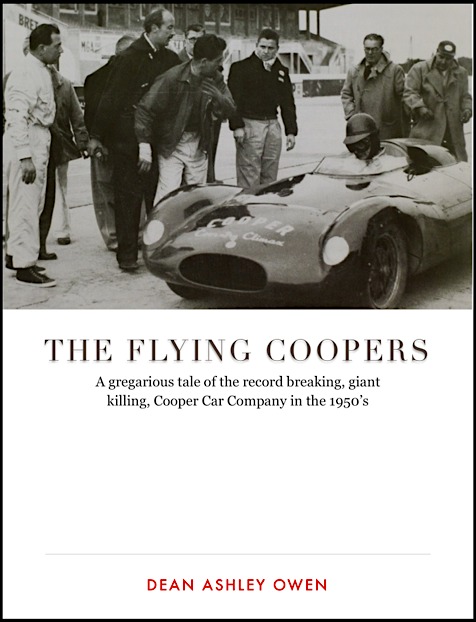 For more on the record breaking Coopers, visit my earlier article “A Tribute to Ron Searles and the Flying Coopers”

#40
I had no idea this article was out there on Twitter apart from amongst my tiny band of followers. Thanks @Margeret Aranda, MD, PhD. I am trying to get active on Twitter but my feed just is not compelling as it is on beBee so I end up only using it to promote beBee.

#40
Hi Mags: I will make sure we follow you. Have a great night!

#30
I always resented Cooper giving up Formula One in 1968 despite the huge success of Mini Coopers in rally car racing. I think John Cooper's heart was broken when his father died. He has said in interviews it was due to the rising costs, bigger engines. Cooper still managed two Grand Prix podiums in their final season. I think he just wasn't as passionate as Chapman, Mclaren, Brabham - more risk averse. Would love to see the Cooper name back in F1 instead of on the back of a BMW Mini. Would love to hear about the "Monza" Wall. The banking on the Monza circuit was absolutely lethal. I don't know much about the Meadowdale circuit, but if it has anything similar, I can imagine it claimed a few lives too. Thanks Phil.

#24
Hi Vincent Andrew Im off to Kalimantan next week. We have a number of wonderful Dyak friends and am involved with a few projects up there

Thanks dean, always a good read with breakfast from you

#29
Well, Dean Owen, I will tell some other stories, if you think they may be of interest to members of Cafe beBee. About, for example, racing against the Cooper versions of the Morris Mini. Doing the "Monza wall" in a downpour at Meadowdale Raceway in Carpentersville, IL. And I'll expect you to continue telling yours, which I will watch for avidly. Cheers!

#26
That is quite a story! I just watched a video of the Wilmot Hills circuit. Looks a lot like the circuits of England in the day. I know quite a few Coopers ended up in the States and Canada. I have been trying to track the Owen/Knight Streamliner which ended up in Canada. I found the car above, which has been restored and is racing in Germany; http://www.ultimatecarpage.com/gallery/Cooper-T53-Climax-47980.html. Thanks for that gem. Would love to hear more if you ever decide to post an article on your dabble in racing....

Dean Owen - I love these stories you write. Seriously. Let me reciprocate with this one. Mid-sixties. I am class racing at an event held by the Midwest Council of Sports Cars at a track in Wilmot Hills, WI. I am racing in G-Production. But I am watching a race for C-Modified -- which is actually a fully open class. The two top contenders in the race are a modified 1966 Corvette (a bored out, ported, and fully tuned monster) and a.... second hand F1 Cooper. I remember the race as the most exciting I have ever seen, including the many professional races I've watched. The two drivers dueled wheel to wheel over the .9 mile course with several hills, many lefts and rights, and one 180-degree reverse. In the straightaway, the Corvette would pull away from the Cooper, which would then catch up by roaring lickety-split into the next turn, braking ever so hard at the last split second, and passing the Corvette on the inside of the turn. Then the process would be repeated. Over and over again for, as I remember, 25 laps. On about the 22nd lap, the Cooper had mechanical trouble and had to retire, leaving the Corvette the winner. But the Corvette driver insisted on sharing the winner's lap with the driver of the Cooper. Cont... pt.II

Dean Owen - pt II One of the reasons I remember it so vividly is that later, in the pits, where my car was parked next to the Cooper, I saw murder almost committed by the Cooper driver on one of his pit crew, a cousin of his. The Cooper has this single huge caliper disk break on its rear axle. Because of the way the race had been run (more and harder braking than on a longer course), that disk in the brake was almost red hot when the car came off the track. Since the race was over, for some insane reason the pit crew member involved decided to cool it off with a bucket of water. He got to about two steps from the car with the bucket, when he was tacked by the driver and owner of the car, who began pummeling him with his fists, yelling how the pit crew member was going to warp that hot disk by dashing cold water on it, and that there were no replacements available -- anywhere in the world. We dragged the Cooper driver off his cousin, got the driver to accept some Champagne and the good wishes of those who had watched the race. And eventually, we all went on our merry ways. What a day. And what marvelous cars the Coopers were, including the diminutive F3s. Thanks for the stroll down memory lane. Cheers!

#24
I had not heard of them but am reading about them now. Incredible! I would love to learn more. I have only been to Borneo for diving. I must make sure to leave the resort next time!

#20
Thank you Vincent Andrew, I just read that your father was a helicopter pilot? I have no doubt that you have a fascinating history full of a culture where family comes first. I spot signs in your writings of a Peranakan culture? Forgive me if I am totally wrong.

#19
Don Kerr, you are too kind. I think you have inspired a whole bunch of us to drop the facade and just be human.

Dean Owen I just this moment got my boys to bed and have a few moments to reflect. Your stories never fail to touch me. They are simple, relevant and well constructed. Beyond these qualities however they have an effervescence of briefly captured memories that bring your history to light. Please keep offering us these wonderful stories. They continue to be beacons of light in this vast social media wasteland.

#10
Thanks CityVP Manjit. Yes, that is a book cover from a book I mentioned here: https://www.bebee.com/producer/@dean-owen/the-man-behind-the-father There is also a pretty cool video of some of the record breaking events here: http://www.britishpathe.com/video/cooper-cars-break-records-at-montlhery Thanks for reading.

#8
Thanks my friend Gert Scholtz. Completing my house move this weekend, so perhaps next week we can start on that article we've been talking about?

#7
Yes, unfortunately, or fortunately it will have to be a work inspired by true events, but I am digging up all sorts of sordid details, secret affairs and stuff. All quite exciting really.

#6
That photo certainly captures the atmosphere of the 1950's, an elegant time mired by hardship. Thanks for reading Franci Eugenia Hoffman

#4
Thanks my friend Stephane Fenner, and thanks for sharing into the Concours d'Elegance Suisse Hive. I hope one day to be able to attend both the Suisse and Lake Como events.

#2
Thanks Margaret Aranda, MD, PhD for your kind words. Where I always find difficulty is replicating the dialogue of typical conversations of the 1950's, knowing what people would, for example, order in a restaurant (Britain had just come off food rationing). It's a lot of research, but fun nevertheless.

#1
Thanks Kevin-san. It's an interesting process for sure, speaking to people on autosports forums etc.

This http://bit.ly/2bGtbCY was your dad? Wow! There was this page https://pbs.twimg.com/media/CeQah21W8AAsRF9.jpg that I can't make out whether it is a plaque or a booklet? According to Millennials we are all nobodies unless we have a Wikipedia page https://en.wikipedia.org/wiki/Arthur_Owen - and not only does Arthur Owen have a Wikipedia page, but a very extensive one https://en.wikipedia.org/wiki/Arthur_Owen - It is such a worthy life and the Cooper team to write about. I quite agree all the ingredients for a great story.

I amost missed this article it would have been a pity 😍

Dean Owen Your imagination is so much shinier than the silverware that is gone. Keep at it Dean although as you say it may take you years. You are so building your own legacy. One day when it is finished I will be one of many to read the book.

Great story Dean Owen and I love the old photos! If only we could have been a fly on the wall in the last pic.

Thanks for inviting us along on the journey Dean Owen as you unpack your memories of your father. It's so worthy to see our parents through a different lens than that of a son or daughter.