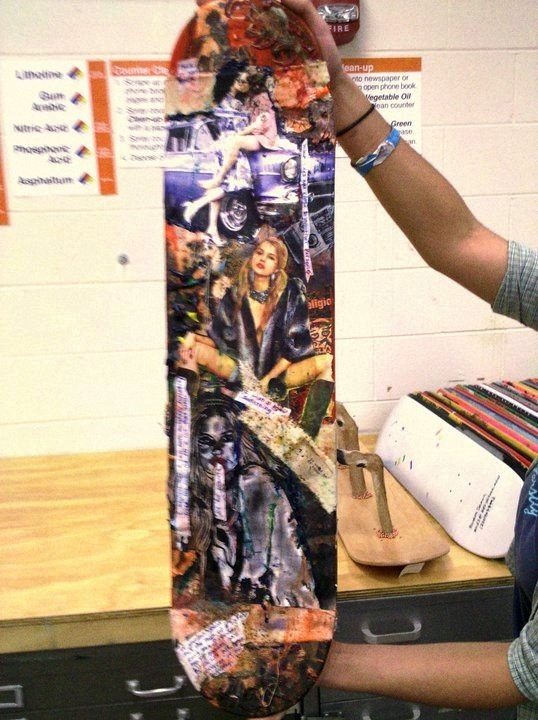 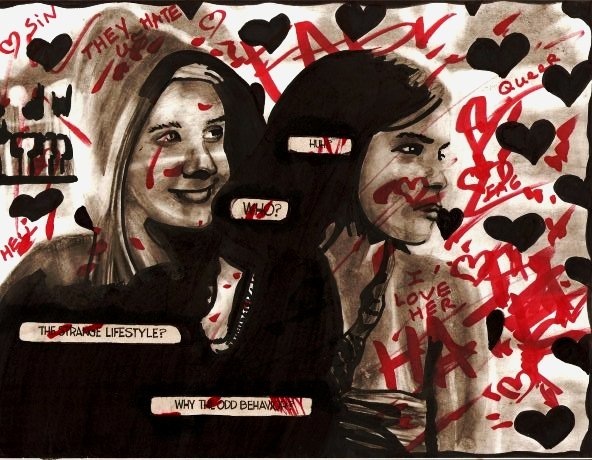 As homosexuals, lesbians, bottoms and fagots, we are supposed to have a dramatic coming out story to tell at parties where we say, “after I got really drunk, I went home and told my mother, look I like eating flower over swallowing anaconda and I don’t want to look at the one eyed snake anymore because that feels gay, that feels sinful. I just want to put my face in a bush and smell it,” but that never happened. My mother never called me a bush lover. My whole family was oddly okay with me coming out, considering when Ellen DeGeneres was on television, my mother literally said, “Get that lesbian off the TV,” and when I was watching Rent, my father said, “I don’t want to watch a bunch of fagots jumping around,” and when my brother came out, he got beat up a few times and socially rejected at school.

When I was younger and therefore more dramatic, I was seriously offended and wounded by my parent’s comments about what they thought of gay men and women. I found them highly insensitive, so I punished them by going on aggressive political rants about equal rights, and how they were acting like bigots. At the time, I was acting like an obvious homosexual, and that is why it was no surprise to my family when I brought home a girl. They were like thank you captain obvious; we had enough clues by your walls being plastered in Jessica Alba photos and you watching every lesbian movie ever and refusing to wear a dress that we kind of figured that out before you.

With hindsight, forcing my father to watch Rent was like putting his hand through a meat grinder. However, it was an important process for me at the time to fight for my own identity, though I could only see my own limited perspective. I felt offended by the slightest remarks, and as a black lesbian with gender issues, I was really ready to be offended and call everyone small-minded idiots.

The reality of my situation was nobody really cared or was offended that I was a lesbian, but I was offended and felt deep shame. It wasn’t the outside world that couldn’t accept me; I couldn’t seem to accept myself because I held on tightly to a few negative remarks  like my mother did say I wasn't allowed to be gay and my best-fiend did tell me I was going to burn in hell. Once my good friend Eric said, “Do you know that bisexuals and biracial people are the most likely types of all to kill themselves,” and I was like holy cow that must be true and means I’m going stick my head in an oven right now because it feels like everyone hates me, but this dark and negative perspective was far from the truth.

This negative perspective about what to expect as a lesbian, got its start in childhood when I was subconsciously taught to reject myself at church. Christianity was a big part of my upbringing, remains a part of my adult life, and put a lot of peer pressure on me to conform and deny who I really am inside. A few people with big mouths told me I had to change for god, so I tried really hard to be straight and this created a lot of pain and depression in my life. I also try really hard to be a typical girl, but it feels so wrong to me, like I am definitely wearing a mask and lying about everything that could make me happy. It made my friends happy to see me with a man, but I was dying spiritually and emotionally. All my sexual experiences with men left me feeling disgusted, frustrated, trapped and used. It felt unnatural being with men, especially in comparison to being with women. If it weren’t for the preacher who convinced me to go shag boys, I would be a gold star lesbian.

I’ve known I was gay since I was a little kid, and wish I would have trusted my instincts and my intuition instead of trying to please others and let them convince me there was something wrong with me. God makes us uniquely flawed so we can be ourselves. If i were perfect I would not be me.  Trying to please others by being straight led me down a very dark and sinful path where I kept trying boys on like hats. In truth a young lesbian shouldn’t run off to church when she is figuring herself out or any gay person for that matter, but I kept finding myself in church, a place known for gay-bashing and homophobia. It’s hard enough dealing with the confusion of love and gender, without having to figure out our salvation and what our estranged relatives think.

I’m going to tell you right now, god is fine with you being a rainbow flyer if you are a good person, but the people in the church might have a problem with you. Yes, it’s largely due to one’s own fear of sexuality, but not everyone can afford a therapist and become high-minded. What I like to do because I don’t have an interesting coming out story is tell people at cocktail parties, “Our bodies are just an illusion. Are souls are so much bigger than that.” I feel like I am in the wrong body a lot! I almost want to be one of those people who goes I am not a lesbian I am straight because I like women and that's what's most natural for my personality and soul. If people could only look past the facade of their body, which is dust, illusionary and transient, we would be free to express ourselves in this world for who we are as people and not by constraining gender roles.

As a Queer the most pretentious response, I get is from the religious community, who  goes you like woman, that’s awful I’ll pray for you, and then of course the cat calls from men who go, don’t worry baby, you just ain’t had good dick yet. The most disturbing comments I get are from bitter women who go, you are just a lesbian because you were raped and fear men. At this stage in my life these comments amuse me. I have learned to role with the punches. I know I could kiss most good little Christian girls if I got five minutes alone with them. I know men are dogs that will hump anything that walks, and I know I’m gay because I’m sexually and emotionally attracted to women. I don’t fear men. That’s not why I’m attracted to women. Actually, that is such a ridiculous comment to make make because liking women actually has nothing to do with men.

News flash; Women are goddesses. I was gay before I was taught long division. I was gay before I knew what sex was. For me coming out wasn’t some lifetime movie I can wrap up in one moment. Coming out is a process that will continue long after committing to my wife. Then we got to explain to the kids why Mommy and Mommy are different than other families and we might have to deal with some women’s crusade to keep the children of gays out of the classroom, I know it’s been said a thousand times, but people take life way to seriously and need to stop with the witch-hunts. Queer people are just people, like black people are people and Chinese people are people and dancers are people. It's just one of the details that makes a person them.

No,  I can’t tell you a cute story about coming out to my best friend who happened to be crushing on me too, but I can tell you what I’ve learned; there are going to be jerks like me who think men should never wear that much makeup even if they are queers. Life is full of jerks and cowards, and people who think we must like the same sex because we were sexually abused or have a demon in us, but none of these things should encumber our lives with negativity. We should not allow others to shame us.

It’s better to get that thick skin and learn to laugh at what others have to say about us. We should never let people cloud our view and see our predicaments as negative. I don’t want a negative self image. I have to be me till the day I die. I want to think positively of myself, so I learned to walk a way from people who view me as evil or awful, or as a person that needs to be changed, because the divine perception of me is that I’m great, deserving of love and glory, so I have chosen to go with divine perspective over what mere mortals think. Mere mortals don't know how remarkable I am, but god knows.

Overall, lesbian life is amazing. I’m not pissed off God made me a lesbian. I thank God for it because I love women. I get to touch women and kiss the soft lips of my love. The sweet delight of being with a kind, nurturing woman, I thank God for it. It would be a lie for me to tell you, it’s hard to be a lesbian or that my life is hell. It feels like heaven on earth being with a woman. It feels like hell being with a man, to me that feels wrong, that feels sinful.

News flash: even straight women want you to stop thinking with your penis and really learn how to make love. Women know how to make love, and nothing in my entire life has felt better than being in the presence of my Queen. So if you  are a part of the LGBTU  community, forgive the rest of the world for hurting you because the world is full of ignorance and cruelty, but you don't have to be ignorant of who you are or be cruel to yourself by pushing away loving relationships because you fear the rejection of society. Society rejecting you isn't the thing that is going to hurt you the most in this life. Rejecting yourself is what is going to kill you in this world. The only way to live is to accept who you are no matter how weird, different or amazingly handsome that might.