The Face of Vogue: Alexa Chung 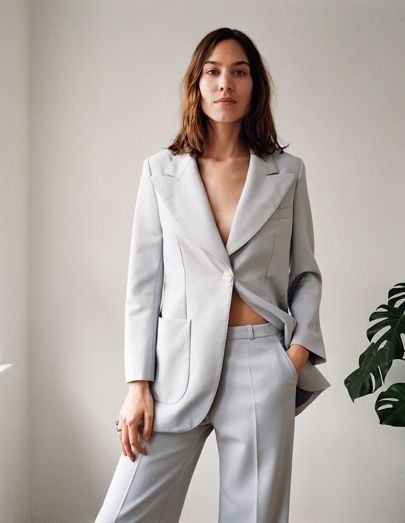 Alexa Chung is the face of Vogue. She is the face of her own brand  Alexachung, which launched May 31, 2017. With over 150 pieces in her debut collection, there's plenty to pick from. We would say her style is cool girl meets tradition.  Over the course of her career, she has worked with a variety of designers Roberto Cavalli, Karl Lagerfeld, Jean Paul Gaultier, Margherita Missoni and Tommy Hilfiger. This collective experience has given the fashion model turned, fashion mogul an EYE for detail.

This creative woman and influential works every side of the fashion world. Not only has Alexa Chung lived life as a fast-paced and gorgeous Vogue model, Alexa Chung has been the observant fashion writer for the industry. She has been analyzing and making commentary on the fashion world for Britain's The Independent from November 2008 to June 2009, entitled "Girl About Town" and later "New York Doll".

More impressively, in June 2009, she was made a contributing editor of British Vogue. She has interviewed designers such as Karl Lagerfeld and Christopher Kane for the publication and wrote a cover story about Kate Upton.

Alexa Chung is one successful woman making bank off the fashion world. Not only is she making bank off the fashion world, but she is taking advantage of social media and her skills gained as a presenter in order to do it. Alexa Chung definitely knows how to use her personality to get ahead in this world. She also knows how to take advantage of social media to spread her influence.

The social media channel who shined a light on Alexa Chung for me was youtube. I looked up successful fashion females and those keywords lead me to Alexa Chung. I was immediately captured by her husky voice and lighthearted spirit.

Alexa Chung was never one of those successful people who struggled for a period of time. Chung was always a success. She got into multiple colleges including  Chelsea College of Art and Design, but instead of doing art foundation courses, she became a fashion model for Storm.

Though Alexa Chung has done pretty much everything under the sun, including writing her own book, starting her own clothing line, and having another fashion company name a handbag after her, the one thing that really makes Alexa Chung standout is simply her essence. She sells her personality more than her looks.
"
#Alexa Chung #Face #Vogue #May #Chung
thumb_up Relevant message Comment

#1
Jerry Fletcher Im finding it harf to find opportunities where I can be myself.

Lyon, Some times just being yourself is enough...or so it seems. I've known folks like Chung. Every one of them has been masterful at going with the flow to maximize their personal brand. They have an innate skill to sense when and where to take that next step. And, most importantly, they don't hesitate.