Slipping Inside an Indian Ambassador 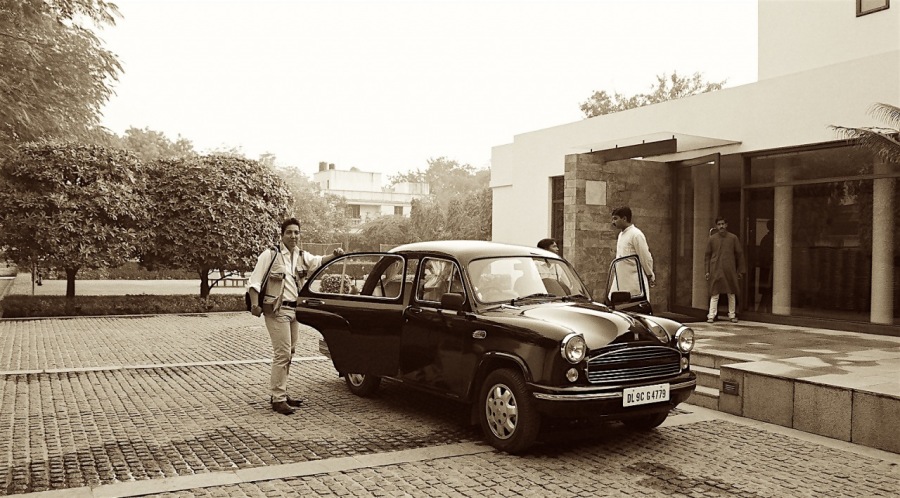 In the Spring of 2014, a wave of nostalgia swept the nation upon the announcement that production of the iconic “Amby” would be halted after a run of 56 years. From Jaipur to Chennai, devotees have since taken to restoring these little runabouts to their former glory. This was a car for all classes – a veritable workhorse used to ferry passengers from diplomats to top military brass, from common criminals to government Ministers. Named “The World’s Best Taxi” by the tongue-in-cheek Top Gear, the poorly built Hindustan Ambassador has complimented an expansive rail network to powered India through an Industrial revolution. Slip inside the Indian Ambassador and one gets visions of grandeur and a sense of nobility. Expansive views, muscular bodylines and sofa like seats gave you the illusion of comfort and safety despite the often bone shaking ride, clunky gearbox, and mushy brakes. The car literally dominated the roads right through to the early 1990’s, at one stage accounting for 70% of all cars in India. In it’s final year of production, complacency finally caught up as sales diminished to a palsy 2,200 cars. 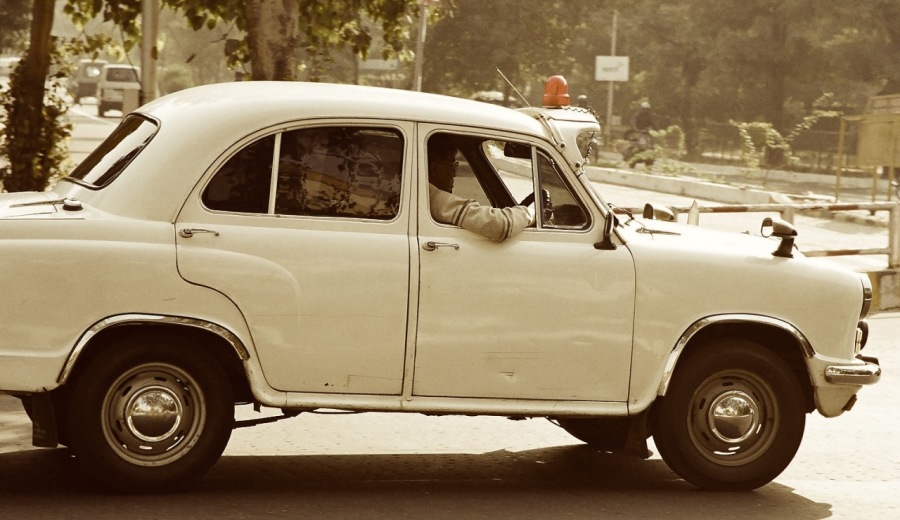 Not many people know that the “Amby” started life on the drawing board of Sir Alec Issigonis, the man behind the original Mini. The basic design cues were taken directly from the Issigonis designed Morris Oxford Series II, a cute little number produced from 1954 to 1956 at the Morris Motors plant in Cowley, Oxfordshire. Morris Motors and Hindustan Motors began producing cars in partnership using imported machining tools and kit parts during WWII at a small factory in the Port of Okha in Gujarat. Production moved to Uttarpara, West Bengal just after the war, and in 1958, the first Ambassadors, originally named the Hindustan Landmaster, rolled off the production line. The first cars off the line had a 1,476 cc engine producing a “steady as she goes” 55bhp, and a zero to 60mph time of around two weeks (well actually around 30 seconds). It was perhaps their simplicity that propelled their success. Sporting a relatively robust 4-cylinder engine and basic 4-speed manual transmission, the car was an easy fix and parts were cheap. It’s no wonder that 33,000 Ambys still roam the roads of Kolkata today in the black and yellow livery of India’s iconic taxis.

For all it’s shortcomings, the utterly charming little Amby remains as charismatic as a Benedict Cumberbatch TV role. Needless to say, I love this car for all that it stands for. Cheap, but stately, but much like myself, this is a British expat that adopted a foreign and beautiful land as it’s home. Like the Chicken Tikka Masala is now as British as jellied eel, the Amby is proudly and uniquely Indian and I would dearly love to own one.

#21
I come from a country full of defunct car brands, and the nostalgia is strong for glorious marques of a bygone era. Thanks debasish.

Dean Owen Given the number on the roads in India These hardy vehicles will sill be around for years to come. Great piece as always !

#19
Now that sounds like fun Dean Owen? ;-) I'm OK with traveling the US by myself... been many places on my own. I've never traveled internationally before but it's on my bucket list and I don't want to waste time. I would have to hit Singapore too since it also looks so appealing. Video and travel blog would be in order for this! I just need an extra job for a few months to make my money to be able to travel LOL! Oh and I'd so love to visit Australia and Scotland too.. hmm, I could be gone for a while?

#17
They are lovely. I'd be happy to find one in any condition and work to restore it. The world is full of fascinating rides. If this was slightly interesting, I think the Jeepneys of the Philippines might blow you away. Hop on a plane to Manila and check them out! Then hop on over to Thailand or Indonesia for a tuk-tuk ride!

#16
Awww Thank you Dean. It's always lovely to hear someone call me that after my dad. You always stir up sweet memories Thank you for that 🤗 #beBeesforever

I never saw an Amby before Dean Owen. They look much nicer than the Mini Cooper (first compact car that came to mind). Do you think you can find an Amby one day? Would you like a good used one, or would you rather refurbish it?

#15
I bet you looked like a Princess in your school uniform riding in the back of these delightful cars. At one stage, I was driven to school in a big black Daimler, you know, one of the cars with a partition between the driver and passengers. I hated it so much I decided to walk to school everyday. I am so glad I stirred up memories for you \ud83d\udc1d Fatima Williams

Wow this is Nostalgic for me as well. I was driven in one every single day for years and then we just forgot about them. But I always loved the Amby's if I were to take a taxi up North in India. There's something about them , the comfort etc . The driver's used to be so particular with maintaining it. My driver loved his car more than his wife. These cars are epic. I think I need to pick up one just as a souvenir but I won't be there to drive it around :( Thank you Dean Owen - An end of a fine state of the art car !

#12
my favourite movie. Everything will be all right in the end. If it's not all right then .....

#10
I'm surprised the Marauder hasn't made the battlefields of the Middle East yet. Perfect car for IEDs.

#8
No worries Ken-san. Actually this is the first in a series of three posts on this theme I will do this year. The next two might be right up your alley, Tuk Tuks and Jeepneys! I've no idea why I've not formed a similar attachment to vintage Morris Oxfords as I have with the Amby. I guess it must be the best Exotic Marigold hotel syndrome.

#9
Dean Owen I have seen a few Amby's in this part of the world - but they are scarce! Seen some Hummers but their popularity is declining. Marauders... this is what I need for the obnoxious drivers on our roads!

#5
Any of these Ambys end up in South Africa? None here in China for some reason. Hey, and I remember watching a Top Gear episode on South Africa's version of the Hummer, The Marauder! What a beast! Do you see any on the roads?

Never had the opportunity to drive or ride in this aristocratic ambassadorial ambulatory Amby, Dean-san, but it reminds me of the Morris Oxford my dad drove for a while, back when I was in short pants and thought I'd catch measles from talking to girls. That's when zero to first base took me a lot longer than your zero to 60 mph.

#4
I don't think I ever saw a 3 wheel car in 9 years living in Tokyo. They had some Daihatsu 3 wheel midgets out in the countryside, but quite rare.

Dean Owen Can't put my finger on why but I love this car - the Amby - seems to have a character all of its own. And the acceleration! :) Nice Buzz Dean.

Cool car, I do like the micro minis too that you see in Japan with 2-3 cylinders & 3 wheels. Best regards, Bill Stankiewicz

#1
I tell you, if I could get my hands on one here in China, I'd drive straight to Tibet. I've been stranded before in the mountains as nobody knew how to fix my car and I couldn't get parts, but with an Amby that wouldn't be a problem. You could probably make the parts with cardboard and scissors!

Few call it all terrain, but it has scaled many peaks. Enjoyed the read. Very informative