Now let's talk Destiny's Child. Not only was this one of the best girl groups ever, but it kicked Nsync's butt. These girls were running around as the black Charlies Angels, and Nsync was having their puppet strings pulled. Nsync gave us Justin Timberlake. and Destiny's Child. gave us Beyonce. ((Sorry)) Justin, but Beyonce is way cooler and a more powerful force. 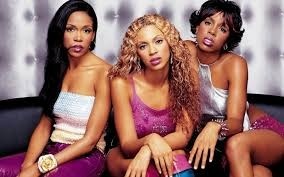 Not only were these three black angels, amazingly talented, they were inspiring and empowering. Their music taught girls about real issues, like poverty and teenage pregnancy.  Not only was Survivor an anthem for women everywhere, but so was Independent Woman. That song taught me to be an Independent Woman and to forget about bug-a-boo's because they can't pay my bills.

Destiny's Child was the most epic thing to happen to girl music because it gave us Beyonce.