Self Made Millionaire or Not: Mark Zuckerberg's Reputation As A Programming Prodigy Is Significant

I am not going to call Mark Zuckerberg, a genius, though I have been passionately lecturing on him in my university business courses for the past week and I am also not going to give him the self-made billionaire title that Forbes gave him because I think Mark Zuckerberg, had a lot of help achieving his success, though he was the brain child behind Facebook. 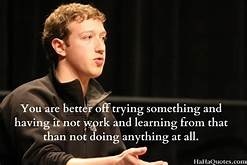 Forbes defines one who is self-made as someone who comes from a middle- or upper-middle-class background, which Mark Z, technically did.  He is the son of Karen (née Kempner), a psychiatrist, and Edward Zuckerberg, a dentist.

An entry-level Psychiatrist with less than 5 years of experience can expect to earn an average total compensation of $183,000 and according to the BLS, dentists earned a median salary of $153,900 in 2016.

However, I do not think Forbes has a fair definition of self-made because the lifestyle of lower middle-class and upper-middle-class is drastically different. It literally is the difference between being able to pay for french lessons for your child and having to be on food-stamps.

Mark Zuckerberg, was intelligent, but more importantly a creature of privilege. His parent's were not obscenely rich, but they were considered upper-middle class and lived well above the average American means .

I think the true definition of self-made is doing it yourself and a lot of people invested capital into Facebook before the website was finished.  Eduardo Saverin   would agree to invest $15,000 in a company that would, in April 2004, be formed as Facebook LLC. For his money, Eduardo would get 30% of the company.

Mark's dad also bank rolled him at some point,  and Sean Parks brought Mark to meetings with really big investors like former PayPal CEO Peter Thiel who gave Mark a $500,000 investment at a $5 million valuation .. 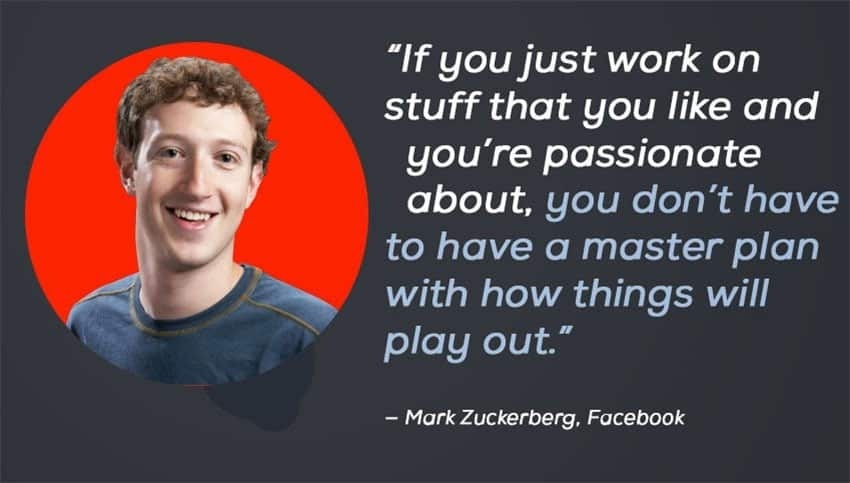 This is definitely a success tip we can learn from Z: INVEST IN YOURSELF and get people to invest in you:

Nothing in this world is going to come easy. You are going to have to work for it. Everyone is given a skill that they must hone and develop over time. With the development of this skill, you can conquer the world.

Since Mark’s interests were in computers, his parents hired a private teacher for him.  His father taught him Atari BASIC Programming in the 1990s, and later hired software developer David Newman to tutor him privately.

Because his family was financially comfortable they were able to invest in Mark's natural talents and interests early. Zuckerberg began using computers and writing software in middle school.

You can call the Z family middle class if you want, but seriously, wealthy kids get private tutoring in computer coding, not lower middle class or poor people. 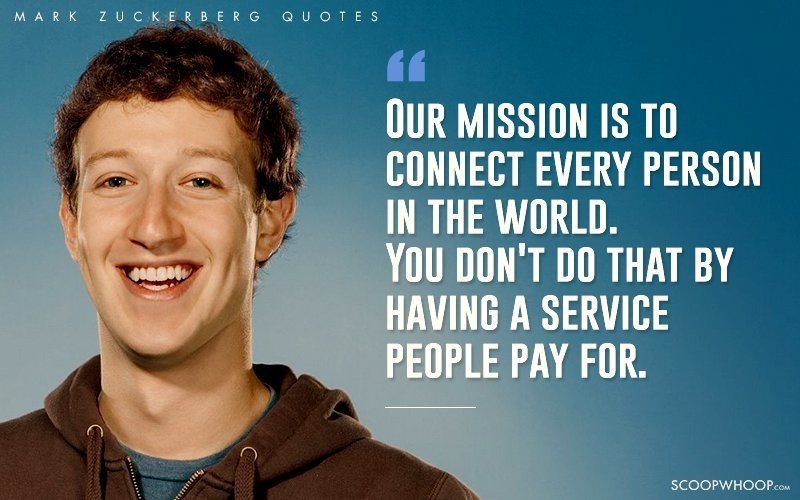 Most people could and would excel in life if their parents invested in them and helped them develop a skill set as a child.  Zuckerberg took a graduate course in computer scineces at Mercy College near his home while still in high school too.

People really believed in Mark Z, and I am not saying that's a bad thing. I am saying, that's a blessed thing. He had a lot of people show him the ropes and invest money into developing his skill set before he even went to Harvard.

It's interesting his claim to fame and fortune was building one of the world's biggest social networks, because as socially awkward as a computer nerd could be, he was a master of networking with people and getting what he needed.

This brings me to perhaps, the biggest lesson we learn from Zuckerberg,, which is....

You are only as strong as the team around you. 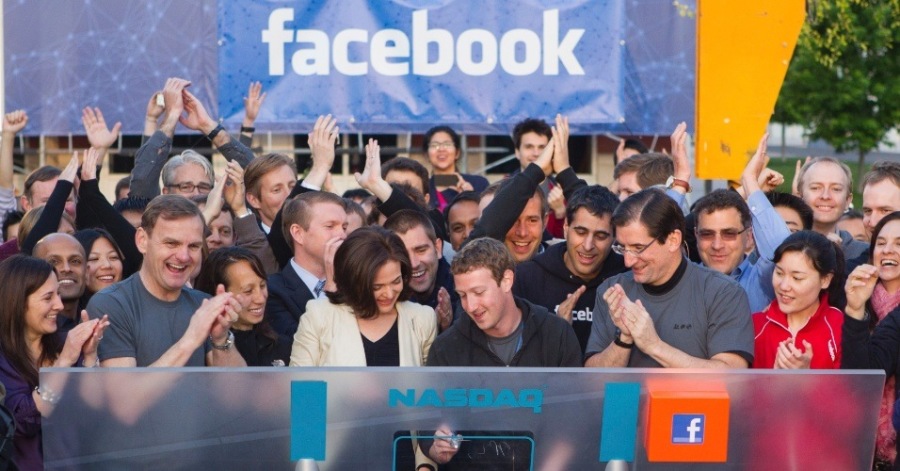 No one can do it on their own.

It is nearly impossible to begin a project of such a massive scale and manage it all by yourself. This is why it is imperative that you build a strong team around you. The best way to do this is by hiring people as smart or smarter than you.

To be honest most people who attend IVY league schools are already rich, so it's like a melting pot for the rich, which is a great place to thrive and meet people, which was another advantage Mark Z had.

His social circle was full of rich and powerful people. Not many people from the truly middle-class or poor neighborhoods can say that. 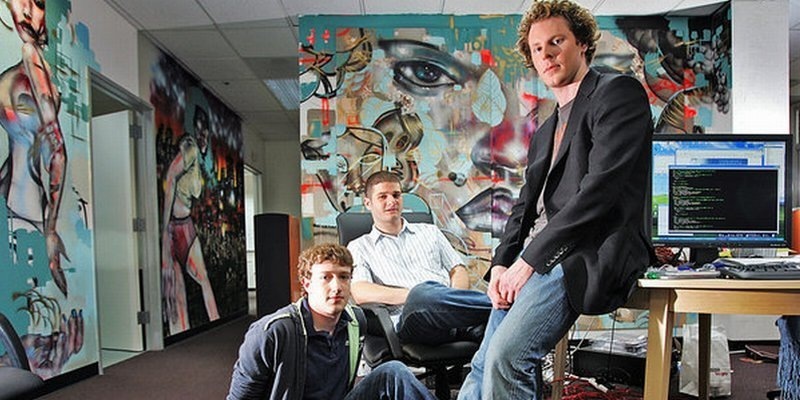 Mark Z, was surrounded by brilliant people who influenced him and helped him.

He was not self-made. He might have been the brain of the body, but a body of people were helping him including the founder of Napster. 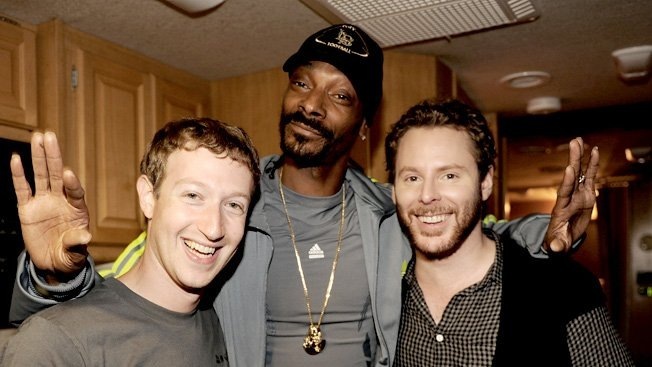 Mark Zuchkerberg, was handed the recipe for success when he was accepted into Harvard University.

Harvard University is the oldest university in the US, dating back to 1636, and is regarded as one of the most prestigious in the world.

Most people think if you get an ivy league education you are guaranteed to have a rich and successful life.

Everyone get's a recipe for success by going to Harvard. It doesn't mean everyone cooks something up.

Now, it's a known fact that Mark Zuckerberg, is a Harvard drop it, but Facebook would not exist without Harvard. Harvard is where Mark Z, conceptualized his baby, where he found start up capital, where the idea was thought into existence. He started coding and launched the site from his dorm.

Anyways, it really doesn't matter if he is self-made millionaire or not, because he is significant to the world. He gave us something more valuable than money and inspired a generation of entrepreneurs to dream bigger than they ever dreamed before. 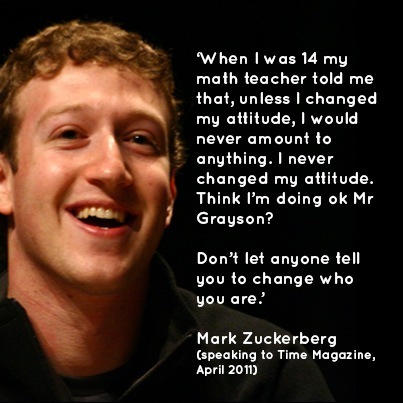 #8
Actually, I do lecture on Beyonce.

An awesome post Lyon Brave Having the right people around you matters. If you are around smart people you become smart and are guaranteed to be better than the rest of them. It's a natural tendency to do so. Loved the read Thank you

An interesting look at Zuckerberg and the key take aways that we can all use, especially your students. The one point I would make is the term self-made is not literally about doing it solo but is in the alternative to inheriting your wealth or winning the lottery. No one create a business and wealth by themselves, as you point out.

The set up, the implementation and original idea was brilliant and somewhat visionary ....the subsequent run management is not matching that level of inspiration far from it.... :-)

Lyon, There was a spark of genius in the basic idea. It was the original "Killer App" But you are very right in saying he was in the right place at the right time with the right people including the selection of his parents. Great post.

Truly, this is a brilliant buzz Lyon Brave. I enjoyed reading it immensely. I like very much the quote on changing attitude. Be yourself, be who you are and make this the basis for your advancement.