Rest and Ricklaxation: What's Holding You Back? 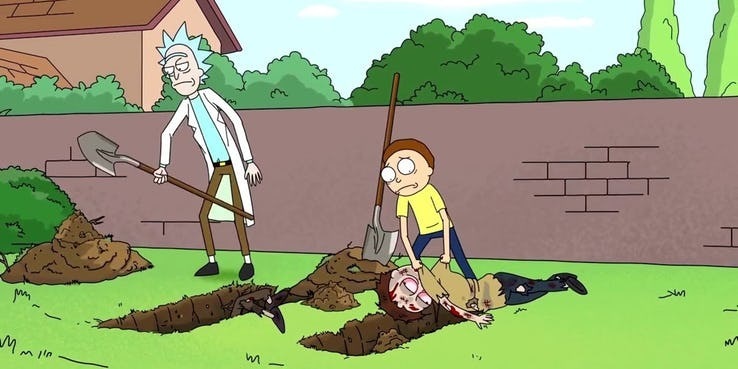 If you stepped through some alien detox machine  that could strip you of your personality flaws and emotional baggage, what would you be like.  In the animated cartoon, Rick and Morty, season 3, episode 6 , Rick and Morty go to spa that detoxes them of the bad behaviors they find toxic, useless or harmful. The toxins then take on a life of their own and become their own entities, so the episode becomes about the healthiest and most actualized versions of themselves, going against the most toxic versions of themselves.

When Morty is his worst self he is filled with self-doubt, complaining and generally, just an extremely insecure person to the point that his presence is annoying and useless to be around. Morty's lower self isn't really evil, just pathetic.  Rick on the other hand, becomes a bigger liar, more cynical and more hell bent on destruction.

Rick's lower self is dangerous. When the bad is removed they are ultimately still the same person, only they are a better version of themselves. It's much easier for Morty to talk with girls without, being held back by doubt.

All of us are filled with cognitive toxins that are holding us back. Every human being has several negative factors influencing their daily lives. This could be negative thinking patterns or unhealthy habits. which can be bad spending habits, eating habits, or thinking habits.

Negativity is dangerous to ourselves and others. Ask yourself why being negative benefits you. It doesn't. Being negative can only hurt you, so the first step you need to take to detoxify your personality is to stop your negative thinking patterns.

Have you ever met someone you really disliked, but spent days thinking about your disdain for the person. You are wasting too much mental energy on a person you do not life, if you have been thinking about them for days, which is why hate and vengeance and anything involving making enemies, is devastating to the soul.

You should not walk around all day with the people you hate in your head. People you hate and people who hate you is a big waste of time.

Not everybody is going to like you and you are not going to like everybody, and maybe it seems strange to dislike someone or be disliked by someone, but it's normal and you need to know how to navigate it, which is forget about them, block them, shut them out.

Life is too short to force yourself to interact with people you really do not like and people who bring out the worse in you are not worth being around, so just do yourself a favor and stay away from people you do not have much in common with.

Try to fix what you have control over and ignore the rest.

Being negative puts those around you in a depressed state, so start forcing positive things out of your mouth. It’s true that if you make positive vibes a habit, it will come easier to you. You will not be able to control every negative habit that pops into your head. The trick is once you recognize you are being negative refocus your thought pattern. You do not need to lie to yourself.

For instance, if you are sitting there thinking, I really hate that person, you do not need to make up a lie about how if you got to know that person they might be cool, because you are still focusing your energy on someone you dislike and just trying to manipulate that energy.

Instead think something honest, like I really don't like that person, so why am I wasting time thinking about them? I should practice my Spanish, or head to the gym.

Nobody wants to be defined as a miserable person, so there are some behaviors and thought patterns that need to be avoided.

In order to not be a toxic person, we need to be positive instead of negative. We also need to take care of our health. You would be surprised the shocking number of us whom neglect our bodies. We let ourselves become overweight and sick and many of us die a couple decades ahead of time because we neglects our health.

One of the challenges of maintaining good health is our poor habits develop when we are young and invincible. We start drinking and smoking when we have the skin of an 18 year old girl and body of a college athlete. We are in the prime of our health when we start the downward spiral of ruining it.

#5
I want to die in old age rather than of old age, that makes it sound like a terminal illness, which could be argued it is. At 77 I would see it as being struck down in my prime, but I'm biased.

I truly enjoyed this buzz Lyon Brave. I wrote recently about the need for having "Brain Detergents" to clean our minds. Your introductory paragraph is a great way to explain what I meant. And so, your buzz speaks to my heart and so, I shared your buzz.