Mean Girls Are Navy Sailors Too

Probably that hardest part about being at boot-camp is the girls. If you are lucky you will get a good division, where everyone gets a long and supports each other, but that's not always the case. There are a lot of mean girls trying to enlist and the worse part is they are just out of high-school, so a lot of them have that high school mentality, which means a lot of gossip and backstabbing.

Unfortunately, this gossip can be detrimental to some careers before they even start. Some of the RDC'S are kind of lazy. RDC's are the division leaders. Instead of investigating the reports and speaking with all parties involved, a lot of RDC's will just make a false report of the gossip like it is fact and then it becomes fact, because the girls gossip has now been written down by a Petty Officer. This is the thing I like the least about my experience so far in the Navy. That any girl can just go say anything about you to a Petty Officer, and it pulls up in a system whether it is true or not, for the rest of your Navy Career or at least a portion.

I really think when people are going to make acquisitions the other party should be present. The person documenting it should at least inform them an acquisition has been made and hear both sides of the story. A lot of times that doesn't happen here. There is not even an investigation before false accusations are documented in your file. 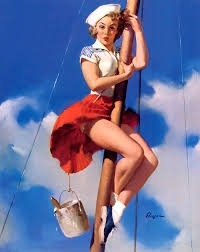 So how do you handle the Mean Sailor Girls?!?!?! To be honest the best way to handle this is to be like Jesus. The more you fight back the more you look guilty, the more people want to hang you. It's better just to ignore it, no matter how much you want to get them back, KEEP YOU MOUTH SHUT.

Girls here will say the most messed up things to you because they are 18, disrespectful and have never paid a bill in their life. Keep in mind they are little girls playing little girl games and though it's infuriating, even sabotaging your career, it's nothing you can't handle.

There will be a time to address the gossip, and when that time comes it's best to be stoic. To take all emotion out of it and report only the facts. The point of gossip is to make you angry. S/he who is angry loses. Get Angry in boot camp and you are very close to getting the boot.

My experience here has given me a crash course in GRACE. I'm learning to bite my tongue no matter what slander gets thrown my way, but I'm also learning to stand up for myself.

#3
OMG Deb \ud83d\udc1d Helfrich...first of all, your name rocks! That's enough to intimidate the pettiest of them all...'Nuff said;-)

But doesn't it feel so good when you get to fully unload. It is true however that in a moment of expressing oneself in a self-defeating environment is tantamount to putting one's head into a reputation noose and hanging oneself with one's own rope. For sure I have heard that if we think of revenge that first we should dig two graves and it is a wasted grave on those that we should have been Dalia Lama. Jesus was not so much Dalai Lama, the Lama does not turn over tables of money lenders in his church or tell a woman that she is a dog http://www.lifeway.com/Article/sermon-crumbs-for-dogs-matthew-15 There are certain times in life it is good to follow in the footsteps of Jesus and not the Dalai Lama, but in the long run, the payback for the Dalai Lama is sweetness and smiles and I have the humility of a human being to know I am not a Sacrificial Lamb. The true difference here is between friendship and fiends and then at the next level between family and friendship is knowing the difference between people who are occupied and people who are kin . The reality is skin deep and when push comes to shove, the last man or gal standing may happen to be the one we were always fighting, not the one we dreamed about sharing life and loving. Those realities are usually found at the end of our road when we are individually raped by our own regret. Yet sometimes we forget that it is our brain that controls our genitals and our genitals need protecting from our own brain - which is why regret is one of those rites of passage we transform into as we get older and why it is the regret we feel as our life interest payment and not the immediate mortgage of our anger, which is our wisest counsel. If studying regret was called learning from history we would all be wiser when we are young - but regret is the masturbation of the love we could have had for real.

Looks like you made the most of it. Nice buzz.

Welcome back, Admiral. "The sailor home from the .... " ..... well boot camp for starters. I hope the rebel is only snoozing, not extinguished, Lyon. 😈 Meanwhile, little girls need big sisters.

Lyon Brave No posts for ever and I thought you had run away to sea then BOOM a post to wake us up on a Sunday morning !!!! Thanks and welcome back !

thanks Lyon Brave! we were missing you !