KILLING YOURSELF OVER MONEY HONEY

Earth provides enough to satisfy every man’s needs, but not every man’s greed. – Mahatma Gandhi

I can see it in your eyes. It’s that look Rose had in Titanic when she was about to jump off the tail end of a ship in a renaissance dress. It’s the blood left on the wall after Kurt Cobain’s shotgun was cocked back. It’s funny man Robin Williams hanging himself. It’s opening the medical bill to see how much your kids’ braces cost, and you don’t have dental insurance.

We kill ourselves to make money. We kill ourselves because we don’t have enough money. And we kill other people to take their money. Money is one misguided concept humans invented. Money creates a monopoly on all resources, and monopolies aren’t supposed to exist because absolute power absolutely corrupts.- Lyon Amor Brave

Being broke creates a vicious and unfair cycle in many people’s lives. Being so broke people look at you like a leopard and forget that you have vastly more value than a couple of twenties is a fundamental problem of all human societies in the world.

The invention of money probably went something like this. What do you mean they won’t give us the guns in exchange for potatoes? We don’t have guns to trade them or we wouldn’t be trying to get their guns. Well give them some of those loose-leaf pieces of paper over there and tell them they will be able to buy better guns if they take it to the shops in Britain.

Whoever said money is the root of all evil might have been right.

When I was in Thailand, I saw an emaciated blind street kid who was surrounded by food but could get none because the food cost money. The vendors were greedy. The hundreds of people who passed him on the street didn’t care. My heart was broken to witness such cruel indifference to a child. This goes on everywhere in the world. Every day, someone who needs help is ignored and devalued over a piece of paper that has no real value.

Humans have become blinded by greed. Financial stress is the number one reason for anxiety and suicide. At the core, a lot of your problems would be solved by money. At this point, some of you will say, why do famous people kill themselves when they have plenty of money??

Well, they kill themselves because they are famous. It has nothing to do with the money. It has to do with being surrounded by people who see your wallet before your heart.
Lyon Amor Brave 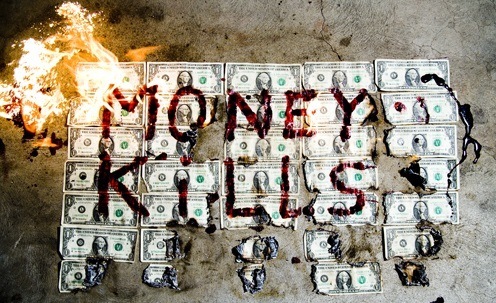 In 2014, there were 42,773 deaths by suicide in the United States. Suicide is actually trending in America. Trending means something is on the rise and becoming more popular. Approximately 105 Americans commit suicide every day.

Though all countries have incidences of homicides and suicides, America’s numbers are disgusting in comparison with other countries. Over a five-year period from 2010 to 2014, the average number of suicide deaths per year in Australia was 2,577. In 2014, America had 42,773 suicides that we know of. I mean we really outshined Australia in killing ourselves.

So why are Americans so fucked up? Duh, it’s because our society is so fucked up. We can thank big businesses like the gun industry for making it so easy to kill each other, and we can thank Walmart and McDonalds for offering shitty salaries like most corporations.  We can thank the government for fucking us in the ass again and again and making us their little bitches.

Financial Tip: Save your money honey.

Conscious Awareness Tip: Greed is the deadliest sin in the world. Greed is why everything is fucked up. Greed is the desire for material wealth or gain, ignoring the realm of the spiritual. It is also called Avarice or Covetousness.

If Samuel L. Jackson were delivering a sermon on greed, he would say, “Don’t be covetousness motherfucker, or I’ll smack the shit out your greedy thieving ass.”