IT'S BRAVE TO RELAX BECAUSE IT'S FINE 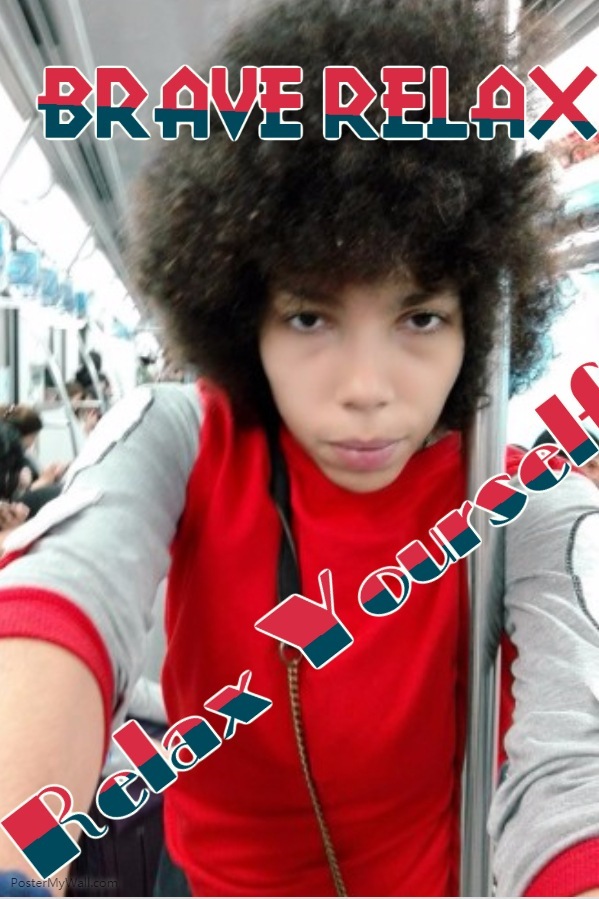 Life is not perfect. It is full of misery, illness, greed that leaves many of us struggling financially, and don't get me started on death and senseless violence.  Losing a brother or father or a lover can be really hard, especially if they were our everything. With that being said, when life gives you lemons, learn to relax.

Some people say the same things happen till you learn from your mistakes. This is true somewhat, but the same things can happen over and over again because that is life, that is the card you were dealt.  It's great to be optimistic, but I am not going to pretend like a kid from the ghetto has, the same opportunities as a rich mother fucker.  Life is a cycle that often repeats its self again and again, the good and bad is a part of that cycle, which is why it's dangerous to be optimistic.

You got to learn to roll with the punches and take a punch. Life can give you a black eye and a modeling career in the same year. Life is not what you make it. Life is what it makes of you. I am here to tell you just because something BAD happens doesn't make it your fault, but if you do something bad it is clearly your fault. You should analyze your own actions and not external events, because you don't control the weather and you don't control other people and if your family members keep stealing from you that's because they are bad people not because you are bad. I am also here to tell you  just because you are good doesn't mean bad things will not happen to you. You can be the best person in the world and still get mugged on your way home from work.

Some people get dealt shitty hands and some good hands like in a game of poker. We have the term Genetic Lottery for a reason. Some of us are born hot and others are just okay if not ugly.  I mean we all like self made millionaires, but it is a lot nicer when you are just born rich and some people are, or they are at least born into loving supportive families, which is very p,powerful, considering some people have mothers who literally end up killing them and their big glory moment is they end up on the FOX NEWS dead.

I am not going to preach life is fair because ain't nothing fair about being murdered in a Starbucks by a crazy disgruntled employee and these incidences of mass shootings are becoming more common in America. There is nothing fair about someone running a car into your house, or abducting your daughter from school, or having a mother locked up and having to go to a foster home as a child. There is nothing fair about life because there is too much racism and general stupidity in the world still. There is a lot that goes wrong and a lot to be pissed about and turning a a trick for bus fair money is not anyways first choice, but a lot of people have to do it because that's the life they are in and some where forced into it.

There is a lot of stupid and senseless shit that happens in life, but if people would chill the fuck out, life could and would be a lot better. The one thing life doesn't need is more drama, which is why I am hear to preach watch how you react  to your life no matter how shitty it is. It's not good to be meek, but it is really not good to be freaking out all the time, even if shit is going bad. Some call freaking out anxiety and this is where you got to smack a bitch and tell her to get a hold of herself.

See I think anxiety happens after we experience something so frightening we really don't know how we survived it. At least for me that's where anxiety started, but I realized since that day I make mountains out of everything. People used to describe me as cool. Now they might describe me as tightly wired and that's got to change. The thing is my support system was also really bad when I got traumatized by that man who tried to kill me. It used to stress me our just meeting new people. I started seeing strangers as a potential threat and this meant I was walking through my life in a constant state of alarm, which meant everything was dangerous in my mind, meeting new people, getting in a taxi, going on a date. I could not relax and this caused me to sabotage some really good opportunities and relationships.

Anyways, it's been over a year since I got mugged in a foreign country and I am just starting to calm down. I didn't even realize how much I was suffering and traumatized from the event because my life moves so fast, but I was suffering. I could barely look at people. I felt a very heavy despair in my heart and the whole time I thought I was the problem, but I wasn't the problem. The man who tried to rape me and forced me to fight him off was the problem. All the sick people who end up on the news are the problem. They are the reasons i started to flinch and avoid strangers. The monsters in this world wounded me physically and psychologically were the problem. it didn't take a day to recover or have my faith in humanity restored.

The biggest issue is because my life moves fast, I had no time to grieve. I had to get straight back to work and of course, this created problems for me at work because I should have not been there but did not have the money just to cry in bed. Being anxious and depressed at work made work hell and impossible. Anyways, I started to realize my perception of the world was greatly distorted. It was like someone threw a milkshake at my glasses  I couldn't just clean it off myself. I had to wait for the sun to melt it off. I walked into a store and realized I was not anxious. I talked to people and realized I could look them in the eyes and because this felt like a restored feeling, i realized how traumatized and broken I have been walking around the world for over a year, not looking people in the eye, assuming the worse, freaking out, panicking, sabotaging my life.

Anyways now that I can talk to a stranger without jumping out of my skin, I can learn to relax again. Myself is being restored. It's important to take it step by step, day by day and realize not matter how many tragedies come, you will have those good days too. One day things will feel normal.