In Love with Benito 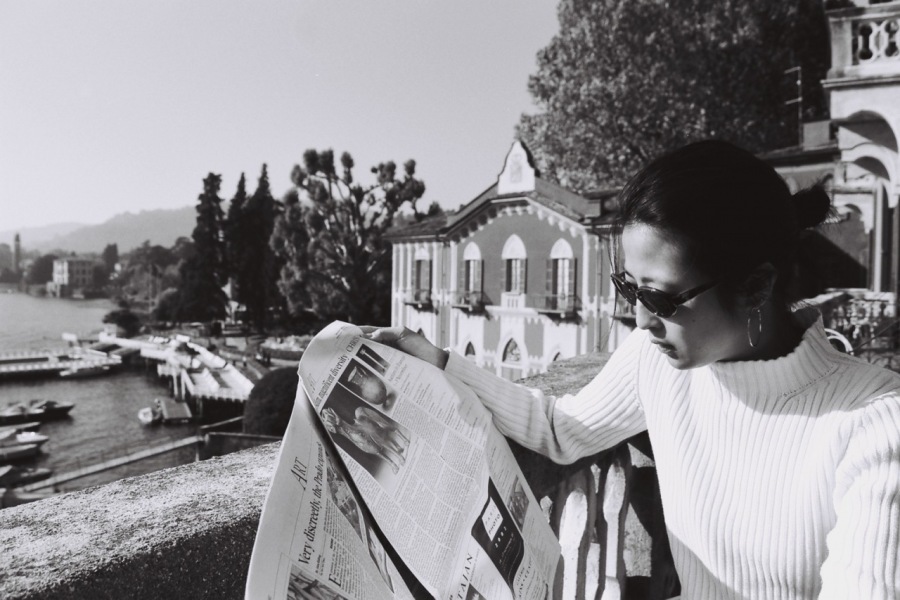 She awoke to a ferocious banging on the door.

“Hurry Signorina, you must leave now!”
Through a crack in the curtains she could see it was still dark outside.

“The British have taken Bologna and are coming this way! You must leave now!”

“What should I wear?” she asked.

“Here! You wear these” the man said whilst lowering a small leather case to the floor.

“5 minutes!” he snarled before leaving the room.

She rose from the bed naked and approached the case. Placing it on a side table she clicked it open.
Certainly not the white cottons and linen suits she was used to, but she knew what was at stake.

As she started dressing, she could hear all manner of commotion coming from downstairs. “Was it all worth it?” she asked herself. She loved him like crazy, and the sex was magnificent. The man was insatiable for heavens sake. But the rumours, the gossip, the stares. And just once she wished he would stay the night.

She rushed on the clothes and glanced briefly in the mirror. Disheveled is what they want, disheveled it is.
She left the room and ran downstairs. In all the panic she’d forgotten to wear panties. Oh well, she thought. Maybe they could play games on the way.

Men escorted her outside to the car. It wasn’t her gorgeous Alfa 6C, a gift from HIM all those years ago. It was apparent she would not be driving today.

Marcello, her loyal brother, was there to greet her. Getting into the backseat of a black wagon she hugged him tightly. Silent apologies.

“Ciao Milano” she whispered as the convoy lead off.

She could see the German armored cars ahead. No doubt he was up there, but what about Rachele and the children?

They settled in for the ride. They were headed for Lake Como and then off through the Alps and into Switzerland. They would be safe there, for a while. Then hopefully Spain.

As the convoy passed by the Lake, she remembered fondly the boating trips they took, just the two of them, away from the scandal. He was just like a kid at the steering wheel. And then that time he ravaged her on the island in the center. She smiled.

A few minutes later, the convoy came to a stop.

A partisan roadblock just outside the small town of Dongo. Ahead she saw a German soldier get out and start talking to the partisans. After what seemed like an hour the convoy started slowly moving again.

“No Italians” she heard. They were checking each car and letting only Germans pass.

“What’ll we do?” she asked her brother.

“Don’t worry, they don’t know us” he reassured her.

As her car approached the roadblock a group of partisans converged on the car. “Papers” one asked as the driver wound down his window.

All at once, she glimpsed the sight of HIM being led aside by a partisan group. Even now he stood magnificent, but his German coat and helmet could hardly mask his true identity.

Realisation led to amusement, and then rejoicing!

They had captured Il Duce.

That night she spent with her love, guarded by a band of fellow countrymen. It was to be their first, and last night they would spend together.

The trial and execution was swift and brutal. Their shot and battered bodies were taken to a gas station in Milan where they were unceremoniously hung upside down along with 5 other so-called traitors. It was soon apparent that she had not worn underwear, but the crowd still pelted the bodies with stones. One good Milanese passerby saw the shame and disgrace and climbed up the stand to pin her skirt to her legs and stop it from falling. She was a lover to a Fascist dictator, but she did not deserve that. Nobody deserves that.

Claretta “Clara” Petacci was mistress to Benito Mussolini, a man 28 years her senior. They were executed on 28th April, 1945 by partisan firing squad. Her brother Marcello was shot trying to escape. This account of her last days is inspired by true events, but is in no way to be taken as actual historical fact.

The title picture was taken by the author at Lake Como not far from where they were captured.

Glad you liked this one James and thanks for reading. I am still learning and see these as practice runs for a novel. Always hard to decide how descriptive to be and I tend toward less is better. The amazing comments I have received on this one lead me to think that possibly I have succeeded. Much appreciated, as always.

Ken-san I think you should stick to 🍻 And hold off on the 🍸! Unless you are talking a new Enigma code that I need to crack before the Chinese do!

#27
Golden eggs must be laid. Nothing good will come from the goose being constipated. Geese come in many species and reside in many countries with different names of feathers.

#24
Thanks Ken Boddie, Like you I try to mix it up as much as possible. I know how hard it is to maintain a captive audience. Glad you enjoyed that one. I have a brilliant idea for a novel in this vein, but because the topic is ultra-sensitive, I need to leave my current country in order to freely research it. It focuses on a 6 hour window on the day after a certain event in Beijing many years ago (which I shall not name).

#25
I really enjoy your articles Dean Owen! Hey there are times I need a week to recover after writing. I don't have subject matters floating around in my head daily. ;-)

#23
Thanks Lisa. I must say I myself need a day to recover from that one before I can start typing again. That was pretty close to the truth although there are numerous different accounts of the last days. To have you feel the "fly on the wall" syndrome I guess is the ultimate compliment. Much appreciated. Will try to continue keeping it engaging!

Your versatility astounds, Dean Owen-San. What next, the historical novel? Riveting, racy and readable.

I was on the edge of my seat reading this Dean Owen! I felt like a fly on the wall which then flew into the car- the story was that visual. I love your photo! Wait, are flies visual lol? Well, you know what I mean ;-) I have to say, this was also very sad. History is deluded with true stories like this and more- even though you did state this was not historical fact.

#20
A very interesting question @debasish, and one I would hesitate to answer on this thread as Mussolini was a very simple character compared to modern day terrorist leaders, much driven by personal narcissism and vanity than some supposed higher cause. I see no passion and love in the actions of modern day terrorists. In the end, evil in whatever guise, is evil.

#19
We are a harmless bunch now that we have given back the Empire we took! Thanks for dropping by Jim Lenihan, You have a great Irish chatshow host name!

#14
Enjoy your trip Paul Walters. Good luck with the literary agents. When in London, have some amazing Lebanese food for me. The Comptoir Libanais in South Kensington is one of my favourites. Go reclaim your daughter from the Canucks. By the end of this whirlwind trip you are going to have so much material, I am positively jealous!

#13
Thanks Donna-Luisa Eversley. There was an Italian movie made in the 1980's, simply called Claretta but I have yet to see it. Fascinating subject matter. I left out historical images as they are quite disturbing and probably not something people want to see on a Sunday morning.

#12
Thanks . Her very intimate diaries were finally made public in 2009. It truly was a fascinating story - http://www.dailymail.co.uk/news/article-1230106/The-fascist-Casanova-New-diaries-lay-bare-Mussolinis-insatiable-appetite-women.html

As always ...a wonderful read on a plane heading to London!!

A brilliant photo, an intriguing headline, and an engaging storyline to get one up and about on a Sunday morning. Better than the NYT! Thanks Dean Owen

#6
Sexecution! 😆 Thanks Irene. I will treasure that comment for years to come.

#2
lol, I guess intense is a good reaction to hope for. I felt immersed in the story writing this one, as if I was there watching. Thanks Mamen Delgado, the picture is one of my favourites.

#1
it felt pretty intense writing this one Irene Hackett, hope it didn't make you feel too uncomfortable first thing Sunday morning. Thanks for reading.

#1
Yeahh, I guess we are sharing intense cups of tea at this very moment around the world. Such a story Dean Owen! And you are dealing nicely with the dialogues... 😉