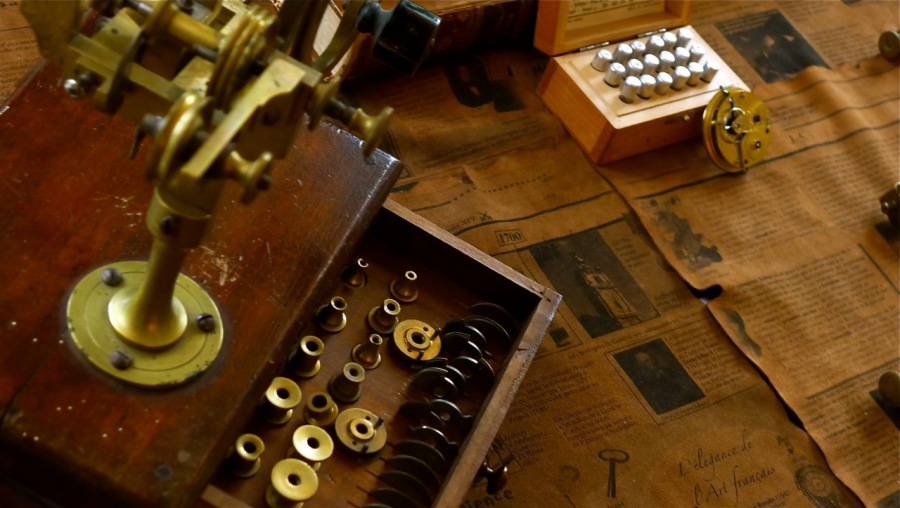 It was back in 2004 that Martin Pauli decided to take things, quite literally, into his own hands. This one-man show is quietly making waves in an industry that has become hostage to supply chains and big marketing. Fed up with being a slave to his suppliers, Pauli took a step back in time.

Pauli had, from a young age, been fascinated by craftsmanship. His career began as an apprentice window display artist for a department store in Bern, Switzerland. Here, he learned many of the skills that would shape his career. After a few years, he stumbled into a career in one of the oldest professions, metal smithing, “due to a bet”. At a knife making workshop just outside of Bern, Pauli learned how to forge and grind steel blades to make knives. It wasn’t long before disruption swept the industry and countries like Japan started mass producing quality knives with the aid of Computer Numeric Control (CMC) systems and Computer Aided Design (CAD) programs.

Pauli kept at his craft, spinning off into gold smithing and jewelry in his spare time.

In a turn of events he was approached to help develop a watch brand. The brand he created was Angular Momentum, but the project hit the end of the runway when additional and required funding could not be secured. Pauli decided to keep the brand, and in 1998, the Angular Momentum watch brand was founded. Unfortunately Pauli knew little about watchmaking, so he had no choice but to work with suppliers for parts. The next six years proved to be a nightmare in terms of dealing with delivery delays and shoddy quality. His livelihood was at the whims of uncontrollable forces. Then 9/11 hit and the industry was dealt a serious blow. The final straw was perhaps a decision by the then Chairman and founder of Swatch Group, Nicolas Hayek, to stop supplying Swatch owned ETA ébauches (raw movements) to companies outside the Swatch group by 2006. It was estimated that ETA was responsible for supplying 70% of ébauches used in Swiss watchmaking (Wall Street Journal). In fairness to the late Nicolas Hayek, he was a man with legendary business acumen and is often cited as single handedly saving the Swiss watch industry during the quartz crisis in the 1980’s (Forbes – The Genius of Nicolas Hayek).

And so it was that in 2004, Martin Pauli decided to reinvent his atelier by using hand operated machines of the mid-20th Century. Today he fashions and finishes each watch by hand, including the cases, crowns, buckles, dials, and hands. The movements are purchased from old assembly companies or specialized dealers, typically new-old-stock movements manufactured between 1950 and 1975. Each movement is carefully disassembled, restored, finished, and tested by the man himself. In 2012, he introduced an in-house “Régulateur” movement with main plate and extensions painstakingly made by hand. Over the years, Pauli has also learned and mastered incredibly complex techniques such as Verre Églomisé, Japanese Urushi (lacquer), Champlevé enamel, Shubuichi and Shakudo.

The watches are bespoke miniature works of art, each one, the product of a single pair of hands that belong to arguably the most diversified talent in watchmaking, Martin Pauli. 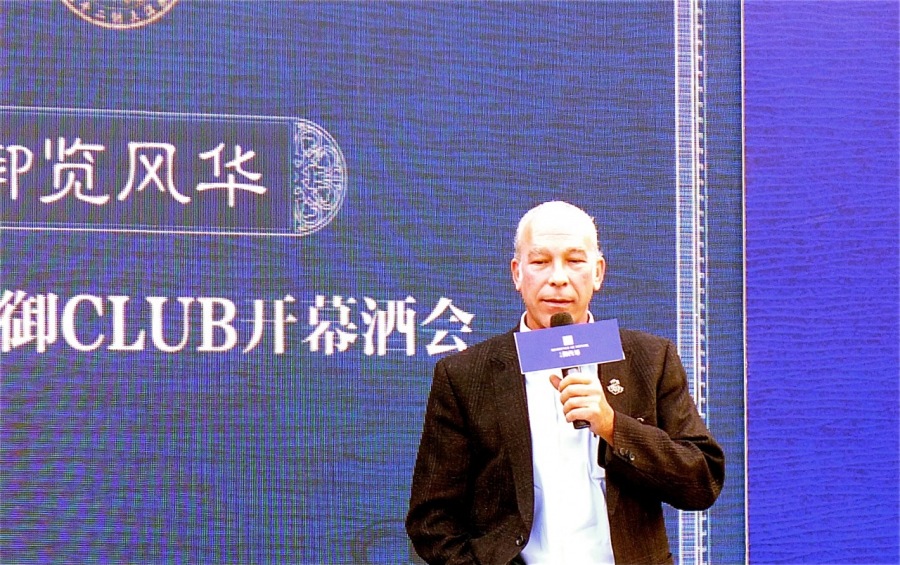 What does Martin wear himself? When I caught up with him during a visit to Shanghai, he was naturally sporting one of his own creations. This particular piece from the 9 “pièce unique” Dragon collection. 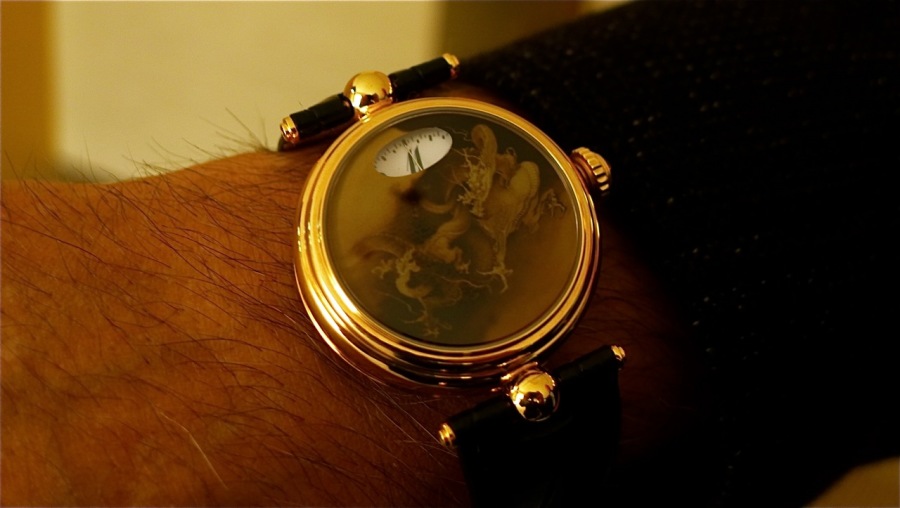 For more information on some of the techniques employed at atelier Angular Momentum & Manu Propria :

The Making of a Timepiece

Miniature Pigment Painting on the reverse side of a Sapphire Glass

One Hundred Views– The World of Angular Momentum & Manu Propria

If you are interested in exploring another incredible independent watchmaker, please read my previous article:

Portrait of a Living Legend 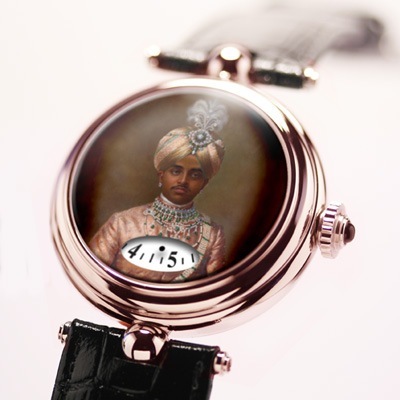 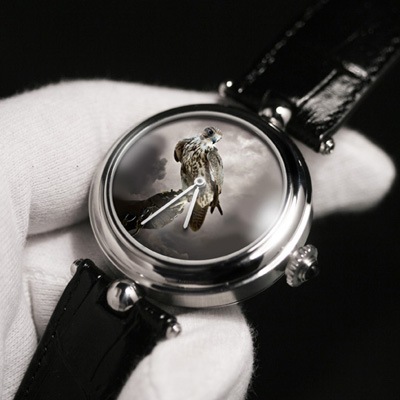 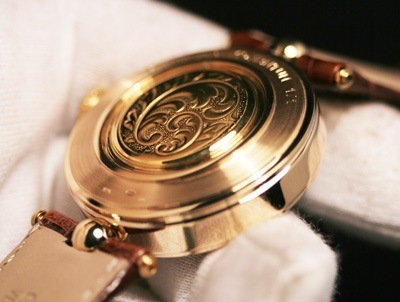 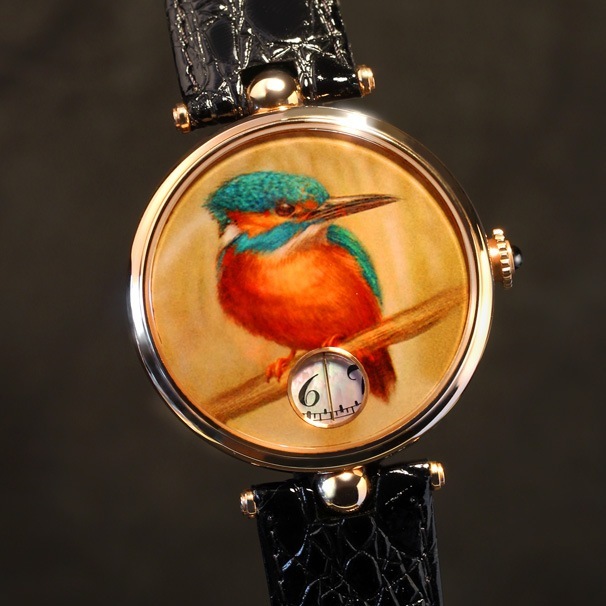 Thanks James. Hope all is well in your new role. Looks like you are super busy.

#30
Truly an incredible chap who is clearly not motivated by big money. Thanks for stopping by Claire Cardwell

Wow - I really admire people that have the patience and dogged determination like Martin Pauli. I love the miniatures, it takes a lot of skill to paint them.

#12
As there are no JC Penny stores here in Oz, Dean-san, it took me a while before the penny dropped. 🤔

#11
A very good question, and yes, definitely something I will cover in the coming months, but I keep my horology articles quite sporadic as there perhaps is not much of an audience yet. There are so many watch forums out there that just talk watches. Hard to get them to budge. The Patek Philippe museum is pretty cool. Next time you are there, let me know. I'll organise a visit to one of the legendary independents.

Dean Owen Pauli had to go back in time to refashion time. Very interesting post Dean. I once visited the Phillipe Patek museum in Geneva. Only then appreciated the history, art and science of watchmaking. I wonder what your top five watch choices are and why? Perhaps in a future post?

#9
Portable sun dial, perhaps, Pascal? Incidentally I often wondered how JC's parents got him to take a bath?

#8
or I can run on the water I heard somebody walked on a sea a long time ago I wonder if he had a watch :-)

#4
I'm surprised you haven't succumbed to the Fitbit!

#3
You could definitely dedicate one to Maggie or Poops! I was so tempted, to be honest, to get that Kingfisher, then drew up a draft of a Hummingbird. I went back and forth and decided now is not the time.

hmmm now that type of stuff could almost convince me to wear a watch :-)

#1
A remarkable and passionate man in this day and age. Zero marketing budget, all word of mouth. A truly artisanal watchmaker who has spent a lot of time in countries like Japan learning ancient arts. Now if only I had spare funds to commission a Kookaburra dial.... I'd love to be able to relay with him by email the design process back and forth and see pictures of the watch being made...

This is absolutely fascinating, Dean-san. I am even more awestruck, having briefly overviewed your first informative link. I have filed this buzz away so that I can check out the other links at leisure. Did I say how fascinating this buzz is, along with the whole concept of making something so intricate and beautiful, yet functional, almost totally on your own?