The cool and clinical nature of the room offered no hint of the hot and muggy day outside. 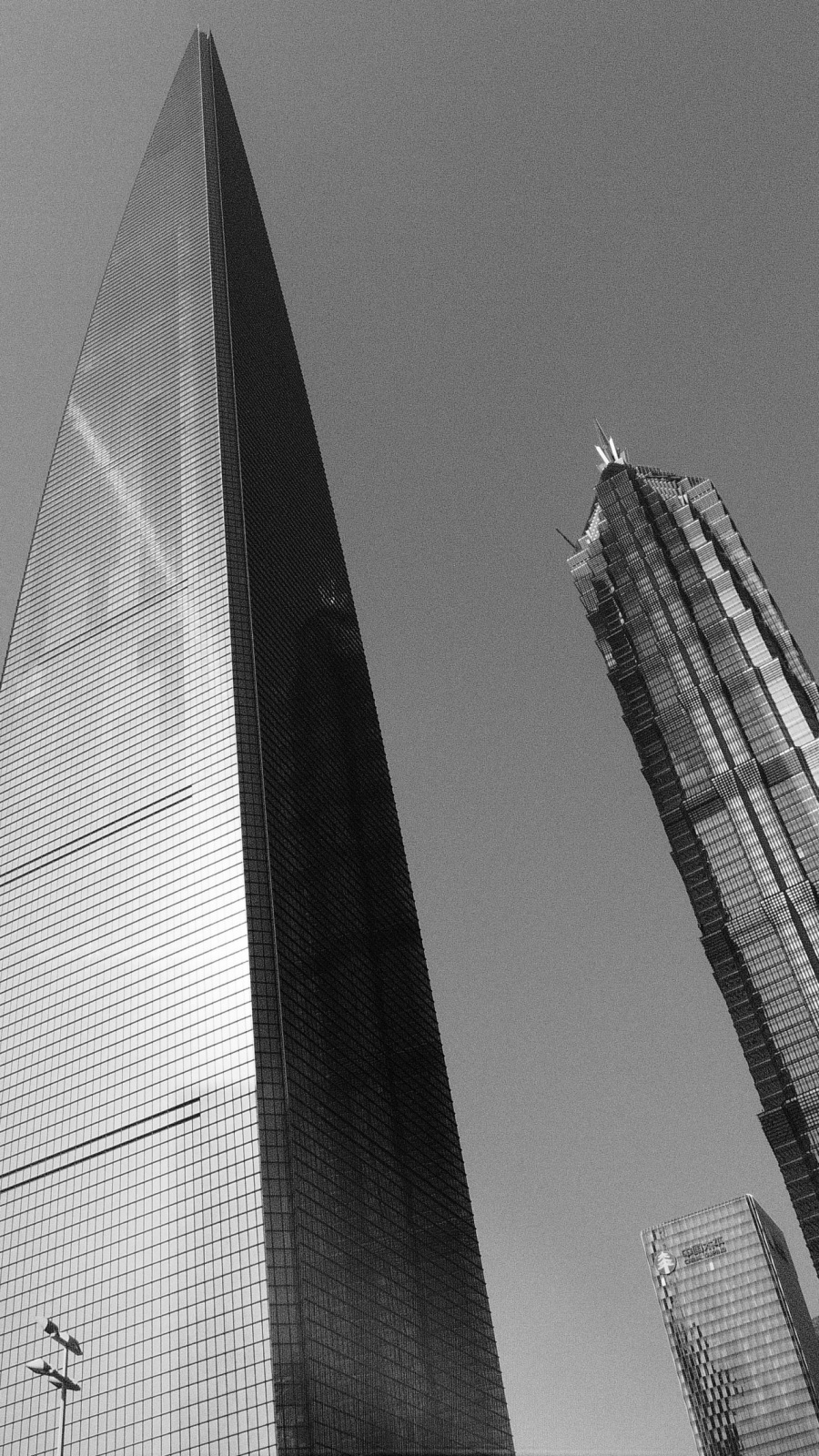 I slipped into the plush white bathrobe and drew open the curtains. The city was bathed in amber as rays of sunlight lit up the Bund on the opposite side of the river. The hotel, tallest in the World at the time, was wrapped in a wire frame leaving me curious as to how they clean the windows. Tinted and dirty, the city no doubt looked darker than reality.

I’d pass on room service this morning and instead head to Gourmet, the patisserie at the Shangri-La for their giant croissants. Settling in with some freshly squeezed pink grapefruit juice and a selection of pastries I thought of the day ahead.

My agent picked me up at the entrance to the Grand Hyatt at 9:00am and we spent the day checking out some quite well appointed apartments overlooking Century Park.

As we headed back to Jinmao I noticed a huge crowd had gathered around the skyscraper all looking skyward. Police cars were arriving en masse as sirens wafted along Century Avenue.

He took me as far as he could and I got out.

Suddenly it appeared. A speck of red, clinging to the top of a skyscraper.

I had a dinner appointment and needed to change out of my summer kit.

If he was going to jump, he better do it fast.

Did I really think that?

And why does one immediately assume it is a he?

I mingled silently amongst the crowd.

The red speck teetered at the top of this colossal building. A mass gasp again as it appeared to dangle over the edge. I rubbed my eyes as it became apparent that the red speck had begun descending the side of the building. Lower and lower it came, floor by floor. Was that my room he was climbing past?

As he came closer into sight, I could make out bits of blue mixed into red.

It was around the 50th story mark that it dawned on me.

I’d read about the exploits of this guy, French I think he was, scaling down buildings without any equipment whatsoever. We watched in awe as the guy descended.

The crowd cheered as he neared the ground.

The police were there, a pack of wolves waiting to arrest him.

He stopped, just a few floors from the pavement, hanging from one hand he took off his mask and waved to the crowd.

Looking down at the uniforms below, he descended the final few floors, and finally, after what seemed like an hour, touched down.

I saw a flash of silver as the police quickly snapped on him a pair of handcuffs. They took him to a van, no fuss, and drove him away as quickly as the crowd dispersed.

The event dissipated and the day assumed your typical Shanghai day.

Alain Robert, aka Spiderman, paid a small fine and spent 15 days in jail for his 420 metre, 88 floor, 90 minute return journey to the top and back. He was promptly deported and banned from entering China for 5 years.

The climb coincided with the release of Spideman 3 in China. It has been reported that he was paid a neat sum of $18,000 to climb the Lloyd’s of London building to promote the Sky Movies premiere of Spiderman back in 2003. Not a bad living I suspect, and it often carries benefits such as room and board, if you don’t mind sparse living and can bear Chinese prison grub that is.

I returned to my room that afternoon. It was beautifully cleaned as one would expect from the Hyatt chain. The curtains were drawn and I walked up to the window to checkout the dusk nightscape. In the grime of the window exterior I could make out a set of hand prints that I could swear were not there before…

Dean Owen Another gem from the orient. My life would be so incomplete without a Dean Owen post each week. Thank you. I do like your choice of hotels; methinks its the fluffy towelling robes that has you addicted !

#7
Now I have to write it! Interesting stuff, stay tuned....

#4
not sure if I've heard the bottle opener story, Dean-San, but looking forward to your buzz on it. Meanwhile I'll resist the temptation to Google it.

#5
Some interesting backstory - He actually requested permission to climb the building and was denied twice, which is what any responsible govt. would do. Just a month after he was deported and banned for 5 years, the govt invited him to climb a certain mountain.

How can China deport a guy that can literally climb back into the country? If he does, they can't put him into prison, he'd probably find a way to escape there also. So what is one to do with people who are more real than Spiderman?

#2
You've seen that building no doubt. I don't think they've cleaned those windows ever! But that mighty building has now been dwarfed by the SWFC (the bottle opener) and the Shanghai Tower, and one more is going up that'll dwarf them all. I was going to do an article on the SWFC building. Interesting story behind the controversy stirred during the building process where the opening at the top was changed from a circle to a trapezoid (I think you know the story)....

#1
Don't be so hard on our friendly baguette toting froggy neighbours! They are not all bad! (You are living proof!) :)

OK, Dean-san, I give up. How do they clean those grubby fingerprints off the windows? 🤔